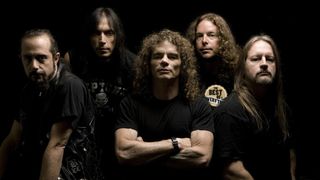 “We came from the New York punk scene meets the New Wave Of British Heavy Metal. Somewhere in there the bastard son of that is Overkill!” says Bobby ‘Blitz’ Ellsworth, vocal dynamo with the New Jersey metal institution since 1980.

Overkill – who came to worldwide prominence with their 1988 single Hello From The Gutter –have been the hard-working heart and soul of the American metal scene for 35 years.

“It really shouldn’t be a problem for the guy who has 17 records!” he cackles when we asked him to choose his favourite Overkill songs without listing their classic single. The hard part, though, is narrowing them down: “It gets kind of fuzzy here and there because there are so many really cool moments!”

Bobby: “It was written in 1999, I was going through a health issue, a carcinoma on my nose. It was one of those things, you know, ‘What the hell’s going on, why’s this happening to me?’ Well I’ve been partnered with DD Verni since 1980, and he rang me up and said, ‘Is there anything you need?’ And I said, ‘You got a song? Something to take my mind off this?’ So three days later the song Necroshine turned up on a cassette tape, without any vocals or melody lines, so while I was waiting for my results that took my headspace to a more positive direction.”

PLAYING WITH SPIDERS/SKULLKRUSHER (Years Of Decay, 1989)

“That was something I always thought Overkill had in us, but had failed to show until that point, which was that sledgehammer type groove. It was really unique to us, and the opposite of what we were with regard to being speedy thrash metal. We came from a different era, But really we had Black Sabbath roots, we were into that dirty Tony Iommi guitar sound, that bludgeoning, ‘I got your attention with four notes’ type of approach, and Skullkrusher showed that. It’s the id versus the ego kind of thing, but I think it carried its own weight.”

“We were writing the W.F.O. record. I’d gone down to my little 8-track studio, and the room was covered in beer cans and full ashtrays. I thought ‘this is totally rock ‘n’ roll, but how the hell can you ever get a song done?’ I was having trouble with one song, I couldn’t get through it, and I ended up falling asleep with the TV on. Then I woke up and wrote the song in seven minutes. I had nothing when I fell asleep and when I woke up, it was done! That was Gasoline Dream. Then I got a sweat on and was like ‘I gotta clean this fucking room!’ That was a really unique experience that always stayed with me.”

“I always loved the Horrorscope record, but it was a pain in the ass, because the record label were like ‘we don’t know if we like this move you guys have made.’ It pissed us off, we were like ‘how dare you come in here and start fucking with what we love!’ That attitude translated itself into much of that record. But when I hear that record start, and Coma comes out of the cage like an unfed lion, that’s what made that record special. Overkill always had a principle: when they open the door, punch ‘em in the face. When they’re leaving, kick ‘em in the ass. And Coma was the quintessential punch in the face.”

“It was another great step out of context for us. It showed that bludgeoning side of Overkill but it had a bluesy feel to it, and it gave me wide open spaces to show my abilities – or limitations, for that matter – with regard to singing. We brought Colin Richardson in to mix the record, and he made our Black Sabbath Vol 4, you know, the thing I’d always put the needle on and have to hear both sides of that LP, not just one song at a time. But that’s a song that always gets me, and stayed in our set forever.”

“When we first started saying, ‘To hell with the covers, let’s go all original’, I remember the riff from Rotten To The Core showing up in a basement in Staten Island. We used to record our rehearsals on one of those boom-boxes, so we had them on cassette tape. I remember going home - I still lived with my parents at the time – and listening to a very early version of that and thinking, ‘Man, this is special’. It’s honest and forthright, and it was its own animal; it sounded like us. And I think when that identity first shows itself, that always becomes a special moment.”

“Another great phase in Overkill’s history is the current one, and I should give it to Ron Lipnicki. Him joining in 2005 gave us the opportunity to push the envelope, to use the tools we’ve acquired over the years to their fullest. He plays drums with a huge positive approach. By the time of Ironbound he’d been with us for two full tours and two records, so when this song got to Ron, I said ‘This is something special.’ I really attribute that to the addition of Ron’s process, his approach to playing the drums. Also it’s just a well-written fuckin’ song. When a six minute song feels like three minutes, you did something right!”

“One of the songs I love playing every time we do it live. There’s something about that tune, to me. It’s got the right the blend of thrash metal and rock ‘n’ roll. One of my things is I love having that feeling that the train is about to come off the fuckin’ track, y’know – ‘Oh my god, it’s going round the last curve and it’s gonna come off the rails!’ – and I always get that feeling with that song. It feels like it’s just hanging on, but we always pull it right in and it sucks in tight like a vacuum. I still look forward to it in the set.”

DRUNKEN WISDOM (Under The Influence, Atlantic 1988)

“It didn’t quite reach that Skullkrusher pinnacle of hammering sludge, but there were elements there that showed that we’d started getting a little groove into our sound, that we weren’t just the train coming off the tracks. I remember Bobby Gustafson recording that acoustic guitar in a bathroom – this was the old days, we couldn’t just get a computer programme and say, ‘Give me a bathroom type sound!’ This was a dude sitting on a toilet playing an acoustic set with a microphone in the sink! This was our first experience with that acoustic approach, and I suppose of broadening our horizons, and saying ‘There’s no fucking rules, we can do anything we want to do’.”

“I’m second generation American; I had nine Irish sisters who used to stand in front of the fireplace and harmonise. So when I get to stretch my vocal chords, or turn a note, or actually sing – and I had that opportunity on Bitter Pill – I always feel somewhere in there is my roots. I remember my mother singing to me before I remember her speaking to me, that’s a great memory for me, and Bitter Pill has an element of that, of what was, what is and what will be. It was cool to say, ‘This is where I come from,’ and sing a nice melody over these bludgeoning riffs.”

Overkill will release their new album, The Grinding Wheel in February 2017 through Nuclear Blast.