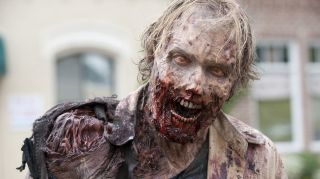 The Walking Dead: Anthrax guitarist Scott Ian is a fan of the zombie show

I’ve been a horror fan since I was five, so I love that the biggest television show in America is about zombies. The Walking Dead is one of the few shows that I think has surpassed the comic books it’s based on. The visualisation, effects and gore are brutal, it’s so well written and the characters are so strong that the zombies become almost secondary. I totally believe if this shit was to go down for real, I’d be more worried about my fellow assholes on this planet than the walkers. Here are my 10 favourite moments from The Walking Dead.

I was bored with series 2 because they’d searched for Sophia for ages and everybody knew she was dead, so when she came walking out of the barn as a walker, I was thrilled. It was awesome that she was a zombie plus I was glad the plot could finally move forward. That sets Carol on her path to become the best character when she sees her daughter is dead.

Besides being such a transitionary moment in the story, when Shane gets killed was one of the major things they changed because it’s Carl that kills the human Shane in the comic, not Rick. I was disappointed at the time because that’s what makes Carl grow up pretty fast, but it was done so well and they took a huge risk so kudos to them for making the right decision.

I loved when Lori gets killed in the jail and Maggie gives her a C-section to get the baby out. That was something else I never thought I’d see on television! It’s another reason why this show is great, they’re not scared to get dark like that. Also, Lori was the most annoying character on the show for me and I was so happy when she was gone.

I love how badass Carol was when she killed those two sick people in the prison, she had no qualms about burning those motherfuckers. She knew she’d have to sit through hours of talking with Rick so she goes to kill them so they don’t spread the virus, she just doesn’t care. That’s when Rick banishes her from the jail, but she should’ve been running that fucking show since series 2.

I hated Hershel as a character at first, I wished someone would shut him up with his moral bullshit. But in the prison, he really stepped up and realised the world he was living in and he embraced that. The writing was so good and Scott Wilson is such a fantastic actor, I grew to love him and I was so bummed when the Governor cut his head off.

The Governor bites the dust (Too Far Gone, Season 4)

I love how the Governor gets it! I questioned when they cast David Morrissey because he looked nothing like the comics, but he’s such a great actor that he brought so much to the role. I’m glad they didn’t string it out too long, he got what he deserved and there’s no questioning whether or not he’s still lurking around somewhere. He got a sword through him, he’s gone.

The most brutal episode! The little girl Lizzie loses the plot and kills her sister Mika because she thinks it’s the right thing to do, then Carol has to kill Lizzie. I was so impressed, I never thought in a million years they’d kill a child on screen. Carol became the most badass character because she made me believe she would do anything to protect what she needed to protect.

Rick goes for the jugular (A, Season 4)

When Joe insinuates they’ll rape Carl, Rick bites his neck and rips his throat out. In that moment he knows they’ll murder his boy, every sense of rationality leaves him and he turns into a walker himself. As a father I completely understand. I’d do anything to save my son. They took it to such an intense, dark place - there’s no such thing as humanity in a post-apocalyptic world.

They’re all about to get baseball batted and get chopped into hamburger meat by the Terminus cannibals, I love how Carol takes down the whole place by herself, she blows shit up with a big ‘fuck you’ and saves all the bullshit by releasing the walkers into the compound. If something like that can engage me so deeply that I almost have to look away, they’re doing a great job.

It’s great when they’re driving up to the roadblocks and you’re watching their hope slowly trickling away. The whole lead-up to Negan playing eeny meeny miny moe shows they’ve finally got in a situation where nobody’s coming to save them. The good guy/bad guy concept goes out of the window because if everything Rick’s done was for the group’s safety, who’s to say Negan hasn’t done the same for his?

Season 7 of The Walking Dead begins on October 23

Anthrax: how The Walking Dead’s Norman Reedus ended up joining us onstage