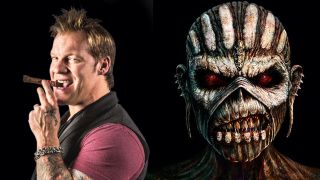 No metal band puts on a show like Iron Maiden. But all the robotronic Eddies and eyebrow-singeing flamethrowers wouldn't be anything without the songs to back it up. And who better to pick a fantasy Maiden setlist than Chris Jericho – champion wrestler, Fozzy frontman and lifelong fan of Steve Harris and the boys? The floor is yours, Chris, so take it away…

“One of my all-time favourite opening tracks. It’d be amazing to have it kick off the show again.”

“I’m not sure if they have ever played this live or ever will, but in my setlist it showcases the Air Raid Siren right out of the box.”

“It’s my favourite song from my second fave album. The middle section is classic Maiden and perfect for the live setting.”

4. Die With Your Boots On

“It’s such an underrated Smith/Dickinson classic. It cooks live.”

“The first of the ‘prog’ Maiden intros will give the crowda breather before exploding into this amazing epic.”

“After a 10-minute ‘new song’ I think the crowd would go nuts for this intro and subsequent rocker.”

7. The Number Of The Beast

“It might be cool to shy away from the ‘hits’, but Maiden have too many to ignore. This is the best.”

“A super-underrated live song. It’s perfect for my set!”

“After another new one, we bust out Maiden’s first ever song and  a total blast from the metal past.”

“My fave song from their newest record, and one of their heaviest!”

“This might be my favourite Maiden song of all time and it still crushes live. Plus, the Egyptian theme of the backdrop and lights adds an expected Maiden historical element to the set.”

“One of the best crowd singalongs ever, it will always be in my set.”

“This obscure rocker from No Prayer For The Dying makes the cut because it’s my set and I love it! Plus, diehards would go nuts for it and it’s fast enough and short enough that casual fans won’t be bothered by it.”

“The perfect start to the encore: Maiden’s best ‘thrash’ song.”

17. Hallowed Be Thy Name

“Maiden’s best live song of all time, hands down!”

Outro: Always Look On The Bright Side Of Life