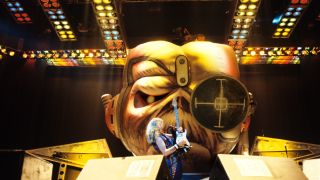 The success of the World Slavery tour, not to mention the subsequent release and chart-battering triumph of the classic Live After Death live album in 1985, meant that Iron Maiden were now in more demand than ever and that all eyes and ears were keenly primed to receive the band’s next creative outpouring. Given that several years of non-stop recording and touring had driven them – and Bruce in particular – to the brink of exhaustion, that kind of immense external pressure could easily have compelled a lesser band to take an extended hiatus or, at the very least, a brief pause. But Maiden were stopping for no one.

“That’s the beauty of having strong writers in the band,” says Steve. “If one’s drying up or one’s messed up or for whatever reason, you know, you’ve got other people who can come in and take over and it wasn’t a problem, really.”

“Most of the things that I had were, really, trying to completely turn Maiden, you know, upside down and on its head,” says Bruce. “I said, you know, we’ve done this big metal thing, should we go a bit more chill-out, maybe we should go a bit more acousticy? And everybody looked at me like I had two heads!”

“I just said, look, a lot of these songs, there’s some good ideas, but they’re just not really right for us,” states Steve. “It’s kinda very Jethro Tull-y kinda stuff, which I love, but it just wasn’t really right. I don’t know, it didn’t feel right at that time.”

After Bruce’s plans to take Maiden in a radical new direction were brusquely rejected by his band mates, the singer stepped temporarily aside, allowing other members of the band to take up the compositional slack. On this occasion, it was guitarist Adrian Smith who grasped the nettle, contributing three songs to the sixth Maiden album, Somewhere In Time, including its first single, the anthemic Wasted Years. With Steve conjuring up his usual flurry of epic songs, the new record was destined to be another grand and substantial statement.

“Adrian has never really been one for writing too many lyrics so the fact that he came in and wrote some lyrics himself… I think he just wanted to experiment himself with some stuff,” says Steve. “It worked out great, three really superb songs.”

Recorded both at Compass Point Studios in Nassau and at the legendary Wisseloord studio in Holland, Somewhere In Time did mark a slight departure for Maiden, in that it featured the use of the then distinctly groundbreaking guitar synthesizer, something that had seldom been a feature in metal prior to that point. Adrian Smith’s songs certainly brought a fresh vibe and an air of radio-friendly oomph to the album too, perfectly complementing Steve’s compositions like instant live favourite Heaven Can Wait and the grandiose Alexander The Great.

It may have been the most controversial Maiden album to date, but Somewhere In Time, with its magnificently inspired and detailed Derek Riggs artwork featuring Eddie in full-on cyborg mode, would go on to delight the diehard fanbase, ensuring that the band’s momentum was in no way diminished by a slight change in musical mood. Released in September 1986, Somewhere In Time was another great success for Maiden on both sides of the Atlantic. Despite having come close to collective collapse at the end of the World Slavery tour, there was no way that Steve Harris or Rod Smallwood were going to allow the band to take their foot off the gas, and so they immediately embarked on another colossal world tour to support the new album.

“Somewhere In Time came off the back of the World Slavery Tour which was picked on by Bruce in particular for being long,” says Rod. “I mean, it was a long tour. Every album and tour, we would get a little bit bigger. It’s my job to make it as big as we can everywhere in the world. This idea of going round the world twice was probably, in retrospect, not the best idea I have ever had. So, this one [Somewhere In Time tour] was only 157 shows.”

Kicking off with a 24-date UK run that concluded with six consecutive sold-out shows at the Hammersmith Odeon in London, the Somewhere In Time tour took Maiden to a new level of presentational audacity. The science fiction vibe of the album’s iconic cover art provided a perfect spring board for the band’s imagination to run riot, resulting in a stage show that was visually explosive and unapologetically extravagant, in keeping with Maiden’s now steel-plated reputation as the greatest live rock band on Earth. With hindsight, however, the tour also marked the point where the band’s penchant for the spectacular dragged them firmly into the realms of the ridiculous.

“This was the ‘Great Inflatable’ tour. Dave Lights was still doing our lighting stuff and he was well into inflatables,” Bruce remembers. “He had a bit of an inflatable megalomania, in fact. He built inflatables that were so big they wouldn’t actually fit inside the sodding buildings! We had two big hydraulic hands, which would raise up – not Spinal Tap at all! – with big Eddie claw hands that would inflate…”

“Me and Bruce stood in the palms of the inflatable hands,” says Steve. “On one night, a lamp was too close and burnt a hole in it. Consequently it was like [makes deflating noise] – I felt a right plonker being up there like that. But not only that! The best thing about it, the next gig we did, they’d patched it up. They tied the fingers back so it came out with the middle finger up… that was quite hilarious!”

“All of a sudden there’d be roadies frantically coming out and going [imitates pumping] sort of like alien hand fluffers!” Bruce laughs. “We had the rising drumkit so that came up on hydraulic jacks taking Nicko to stratospheric heights, and of course the Eddie head that inflated underneath. It was great except when the pressure started to go and it looked a bit like a saggy bin liner. Ha ha ha!”

Never a man to hold back from injecting some theatrical flair into Maiden performances, Bruce was in his element during the _Somewhere O_n Tour, arriving onstage adorned with some of the most bizarre and elaborate costumes imaginable. Maiden chose not to have any of the gigs on the tour professionally filmed, but despite that unfortunate oversight it’s safe to say that anyone who saw the band at that time will have the image of Bruce’s stage gear, not to mention his bandmates’ increasingly flamboyant variations on a Spandex theme, permanently etched onto their memory.

“What were we thinking? Ha ha ha! That was the era where it was big, loud costumes and loud production and a loud band,” says Dave Murray. “Everything was really loud. You had to wear sunglasses quite a lot because of the sheer volume… there was a lot of volume coming just from the clothing.”

“I mean, obviously I didn’t think it was Spinal Tap at the time but you know it is a pretty odd garment that I’m wearing out there!” Bruce confesses. “‘Right, what I want to do is I want the top half to be a bit Errol Flynn, you see, and the bottom half I want to look like they’re trousers that would be worn by some sort of space hunter in the Forbidden Zone type of guy who’s come along and shot lots of alien-looking toads and made trousers out of them!’ Then we had the issue of the very kitsch beating heart with what were supposed to be rope lights. The idea was that the whole suit would be covered in veins that would just be pulsing the whole time so, in the end, the way they got it to work was about 30 pounds of copper wire inside a big jacket and a six-volt lead acid battery stuck in there which ran out of juice about halfway through the song!”

Malfunctioning inflatables and ludicrous clobber aside, the Somewhere In Time tour was another unequivocal triumph for Maiden. Not only were they now enjoying unprecedented levels of popularity in both Europe and America, but even the Far East had succumbed to their charms – a phenomenon that led to the band headlining at Japan’s legendary Budokan venue for the first time.

“It was a big deal to play the Budokan,” says Rod. “It was the first time we’d played it. Budokan is a hugely famous Japanese martial arts centre. It’s sort of an honour to play there, and it’s really nice in Japan to reach the stage where you can.”

“I found it strangely disappointing actually,” notes Bruce. “I always visualised it as being [raises voice] The Budokan, and it’s just a gym! But we got to the end of that tour and I thought, ‘Oh, that wasn’t too bad!’, had a little think about things, and then I was chatting to Steve and he said ‘Concept album. Seventh Son Of A Seventh Son!’ and that was it. I was off to the races then, I was like ‘Brilliant!’”