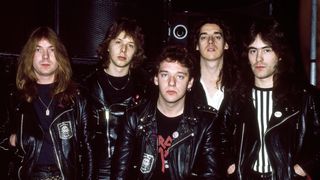 It’s February of 1980. Punk has faded badly. It’s trying – and generally failing – to catch a second wind. The top end of the UK singles charts is a mess, featuring country veteran Kenny Rogers’ useless Coward of The County on the one hand, and The Nolans’ wretched I’m In The Mood For Dancing on the other. The only rock band riding high is Styx, the Manilow of Metal, with their saccharine weepie Babe. But away from Radio 1 and its never-ending cheese, something is stirring. That something is the New Wave of British Heavy Metal, a truly underground movement of curly-permed, tightly-trousered men intent on bringing balls back any way they can!

East Londoners Iron Maiden are leading the charge. After an independently released EP, The Soundhouse Tapes, has caused an underground buzz, the band have signed to major label EMI, promising real undiluted metal and absolutely, definitely no sell-out. Maiden’s latest single, Running Free – a mash-up of super-charged Thin Lizzy riffs, surprisingly punky vocals and an insistent drum beat that (whisper it) might just have been nicked from Adam and the Ants – is causing a commotion. Commercial media, in the form of the BBC’s flagship music show, Top Of The Pops, has come calling. But there’s a problem. In keeping with the show’s sanitised sensibilities and to make filming easy, the BBC bigwigs want all bands to mime. Maiden have been blowing roofs off venues up and down the country. As far as they’re concerned, miming’s for wimps!

“We had previously told our label EMI that we would never do TOTP unless we did it live,” says Maiden’s manager Rod Smallwood. “After all, we were a metal band, not a pop outfit. ‘Running Free’ came out and we were asked on. Well, nobody since The Who in 1974 had done it live, but we stuck in and said, ‘no live, no Maiden.’”

With collective band and management heels firmly dug in, a short standoff occurs, but metal’s the winner and Maiden get their way.

“It was quite funny because we had to tone everything down,” recalls then Maiden guitarist Dennis Stratton. “The amps were very very low and the drums were all taped down. The idea was that if there wasn’t a lot of volume from them then there would be less spillage into the mics, which made recording sound hard. It was quite funny really, because I don’t think Top of the Pops were expecting such an onslaught. I still remember it today. A very good session.”

Looking back on the band’s performance a full 36 years later, their stubborn decision to cock a snook at TOTP’s miming poseurs still feels like a good one. The live sound is raw, edgy, attitudinal and just about heavy enough given the studio confines, while vocalist Paul Di’anno delivers a raw-throated delivery that revels in what at the time was called his “rough-hewn, stable boy charm.” It’s a long way from the epic prog metal that Maiden were to develop once they’d conquered the four corners of the globe, rather than just one tiny TV studio in London’s White City area. But this version of Maiden – young, arrogant, naïve, impossibly thin – remains a favourite era for many of the group’s original followers. As a young metaller myself, I remember believing Maiden’s ‘live or nothing’ stance as a call to arms, a rallying cry against a tidal wave of bland. It may seem far-fetched in today’s more cynical times, but Maiden refusing to mime truly felt like an important moment in British rock history.

Running Free ended up spending five weeks on the charts, entering the Top 40 at number 46 and peaking at 34 in week three on March 8, 1980. Did the band’s live performance hinder the single’s progress? Would a more polished ‘performance’ have appealed to non-metal fans? Inevitably, band leader and bassist Steve Harris sums up the Maiden attitude best.

“I had a bit of an anti Top Of The Pops thing,” he admits. “They never had anyone decent on, and I was really adamant that I wasn’t going to do it if they made us mime to a playback. I just thought ‘Bollocks to them. What have they ever done for me?’”