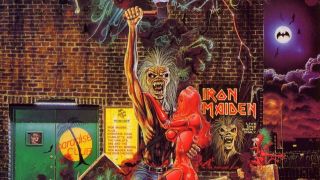 Bring Your Daughter... To The Slaughter single artwork

27 years ago today, Iron Maiden did the impossible – they took heavy metal to the top of the UK singles charts. Their mainstream-slaying Bring Your Daughter… To The Slaughter not only features the laziest rhyme in history, but it was the very first number one single by a metal band. Yup. Metallica didn’t manage it, neither did Sabbath, Priest or Slayer, it was Bruce’s ode-to-anal, hastily-written song for a horror film, that brought 1991 in with a scream and a bang.

The only problem? Well. It’s a bit shit, isn’t it?

It’s not only that the title and chorus sound like it came from the My First Rhyming Couplet book – it’s the whole damn song. In fact, it’s not so much a song as it is some toilet graffiti someone has superglued a verse and solo onto. The Trooper, it ain’t. The breakdown itself is just the words “bring your daughter” repeated in a hushed tone, switched up halfway through to “fetch your daughter”. Which sounds even less sinister and more like a reminder to pick Sally up from school.

There’s no trademark Iron Maiden gallop. In fact, the whole No Prayer For The Dying album was weaker than Poundland wine – a far cry from the phenomenal previous album Seventh Son Of A Seventh Son.

Yet Bring Your Daughter… still reached number one in the UK, and is Maiden’s only song to top the Top 40. And there’s a very clear reason why – metalheads love an underdog and sticking two fingers up to the boring old farts who clog up airwaves and TV time. In this case, it was one Cliff Richard. The permatanned heaven enthusiast was heading for Christmas number one with Saviour’s Day, so Maiden released Bring Your Daughter… to try and out-do him – despite the BBC refusing to play the song on Radio 1, so appalled were they at Bruce looking for access to the “backdoors” of the nation’s fair ladies. I mean, can you imagine, Dorothy?

But never underestimate the power and passion of heavy metal fans with a bit of spare cash and a hatred for commercial music. The song went straight to number one on December 30 (having missed the Xmas cutoff) and stayed there for two weeks. The first metal song to do so, and would remain the only song until Limp Bizkit turned up with Rollin’ ten years later.

And that’s the only real reason to love Bring Your Daughter…. It doesn’t matter that the song is a bit naff and was originally written for the fifth(!) Nightmare On Elm Street movie, because heavy metal is meant to be a bit campy, a bit silly and a bit OTT. Bellowing the same words over and over again might seem like a cop-out for a lyricist (especially one with as much pedigree as Dickinson), but it’s much more fun to fist-pump along with a simple chorus than chinstroke at the deep metaphors and dictionary wanking that some bands fling out.

Every Iron Maiden Album Ranked From Worst To Best