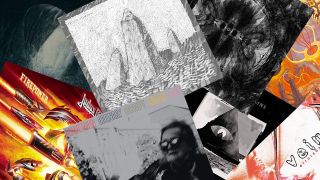 Tis the season to read lists, fa la la la, la la la la. And this is the definitive end of year list for any heavy metal fan. Why? Because it's voted for by metal fans! Thousands and thousands of you voted in the Best Metal Album Of 2018 poll, which has crowned a different winner to our in-magazine Top 50 list! There's even an album in this list that we didn't include in the mag at all! Shows what we know, eh?

So, without further rambling on about lists and numbers, here is a numbered list! It's the 30 Best Metal Albums Of 2018 – as voted for by you. No arguing, this is your list.

"Polished, arresting and deeply ambitious, this is their most mature outing by a long shot. Each of their previous records have come in progressively shorter, with Serpents… barely crossing the 30-minute mark. At 46 minutes, Devouring… boasts substantially longer tracks, such as The Vault, a sprawling, nine-minute epic that builds to an utterly luminous crescendo. Put simply, there’s not a bad track in the mix and with each successive listen, the album yields seditious new charms. Get involved."

"Ihsahn is one of the few artists fortunate enough to have had two successful periods in their career, and that is entirely down to his ceaselessly evolving vision and creativity – a phenomenon in a scene often laden with legions of imitators and very few innovators. Like its predecessor, Arktis., Àmr effortlessly strikes a balance between accessibility and extremity, melody and pitch-black fury, incorporating influences from genres far and wide and coalescing them into a new form singular only to their creator – the definitive hallmark of a legendary artist."

"Working with his writing partner Atticus Ross, it’s impressive and maybe concerning the level of pitch-black tension and fury poured onto the album like thick tar. And yet it never feels morose or downbeat, the swaggering breaks of Ahead Of Ourselves ooze coolness and the bubbling, lava lamp electronics of lead single God Break Down The Door would fit right at home at any industrial/goth night, complete with Trent’s smooth-as-silk croon of ‘Remove the pain or push it back in’. Of course, all of this ‘accessible’ music is juxtaposed by the sudden, jarring drops into heaviness and distortion, even incorporating a guitar, despite Trent previously vowing to never pick one up again."

"Much like their peers in Code Orange, Vein deal in irresistible but impossible-to-pin-down-hardcore, and (fairly lazy) comparisons are bound to be made with Slipknot – although the drum and bass clatter of opener virus://vibrance does beautifully recall the Iowans’ classic Eyeless. That’s doing Vein a disservice, though; there are far more nods to early 00s hardcore pioneers like Botch in the way broken glass complexion layers a multitude of screaming vocal patterns over a mathy riff, or spasmodic, jazzy mentalists Drowningman on the grind, stop, chug and repeat groove of doomtech, or the constantly, tightly wound precision riffing of Poison The Well throughout. There are even nods to everyone from Godflesh’s gristly industrial hum in anesthesia and Quicksand’s raw, melodic emotion on the album’s title track. Essentially, Vein have taken everything good from heavy music in the last 25 years, smashed it up and re-compartmentalised it into their own, ugly new form."

26. Rolo Tomassi – Time Will Die And Love Will Bury It

"Their greatest trick, though, is in the moments when they bring the light and dark side together, as on A Flood Of Light, setting them against each other to create pure, blinding energy. It’s a kind of witchcraft, a wildly inventive journey into the unknown as one song flows into the next with no warning of what might be ahead. Yet again, Rolo Tomassi have proved themselves to be in a category of one."

"The closing eight-minute-long monolithic stomp of Hadal manages to recall everyone from early mastodon to peak Neurosis, from Converge at their most distraught to Will Haven at their most sadistic. When names like this are being thrown around like a rag doll in your head as Conjurer are aurally punishing you then it’s worth sitting up to take notice."

"Unflashy and sonically quite dry, it only reveals its nature after few spins, especially on the album’s second half. It’s only once you’ve stopped looking for metal’s typical driving force, the mighty Riff, that you start to find yourself getting sucked in. To use a fitting cinematic analogy considering all the references to the vampire mythology: if this album was a movie of Bram Stoker’s Dracula, Tribulation’s approach would have more to do with Werner Herzog’s more cerebral Nosferatu The Vamypre than the grandiloquence of Stoker’s classic."

23. Black Peaks – All That Divides

"Navigating these songs is an exhilarating thrill, exploring a maze of splintered twists and dynamic shifts, trying to anticipate the quartet’s next move but ending up somewhere completely different. On highlights Aether and Home, the band have left space to let the melodies breathe and build to wild-eyed, and, in the case of the former, string-led climaxes. "

"Ten minutes of sprawling but austere doom-via-post-metal, opener Ablaze is the sound of Mike Scheidt in full cosmic hellfire mode, his increasingly soulful voice soaring above wave upon wave of thick, sinewy riffing. But it’s the second track, The Screen, that provides the album’s first startling revelation: built on a grinding staccato riff that is more Gojira than Grief, its glacial creep intermittently morphs into a chorus of euphoric grandeur, oozing spiritual ennui and a gripping hint of menace. There is even an unmistakable trace of Triptykon-like morbidity to that main riff and its deathly, end-of-song payoff: evidence, perhaps, of psychedelic dreams turned sour and sinister."

"If the first Piggy-less Voivod record steadied the ship and kept the fans happy, their 14th full-length, The Wake, is where this most instinctively subversive of bands veer off on another of those wonderfully wilful tangents that brought us the seminal likes of Nothingface and The Outer Limits. Fifty-six minutes of the wildest and densest music they’ve made in a long time, it’s unmistakably Voivod, but somehow bigger, more colourful and more avowedly psychedelic than ever before."