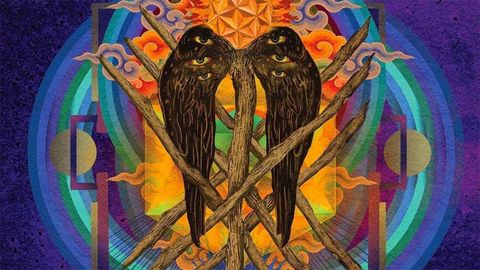 Monolithic, monumental, monstrous... the words we use to feebly describe the sheer enormity of Yob’s music hardly seem fit for purpose at this point. One of those rare bands whose every release feels like a genuine event, the Oregon space-doom legends have conceivably been able to take four years between albums because many fans are still lost in the swirling sonic vortex conjured by 2014’s Clearing The Path To Ascend... and may never come back. But they should definitely try, at least, because Our Raw Heart is an album of even greater depth and density.

Ten minutes of sprawling but austere doom-via-post-metal, opener Ablaze is the sound of Mike Scheidt in full cosmic hellfire mode, his increasingly soulful voice soaring above wave upon wave of thick, sinewy riffing. But it’s the second track, The Screen, that provides the album’s first startling revelation: built on a grinding staccato riff that is more Gojira than Grief, its glacial creep intermittently morphs into a chorus of euphoric grandeur, oozing spiritual ennui and a gripping hint of menace. There is even an unmistakable trace of Triptykon-like morbidity to that main riff and its deathly, end-of-song payoff: evidence, perhaps, of psychedelic dreams turned sour and sinister.

It certainly feels like Yob’s harnessing of altered states has taken a dark turn here. The traumatic reality of the frontman’s recent near-death experience at the mercy of a rare intestinal disease hangs heavy over every note; the band’s trademark wall of shimmering distortion is supplanted by a gruffer, more muscular approach, as showcased on In Reverie’s opening riff, which sounds like some acid- fuelled Bongripper funeral march before Mike Scheidt’s angsty roar bursts through the gloom. While more oppressive than immersive, it’s every bit as absorbing as the band’s greatest moments. By the time you reach the album’s two colossal epics, Beauty In Falling Leaves and the climactic title track, you may already have been pummelled into submission, but Our Raw Heart is an album that boasts as much ingenuity, charisma and excoriating emotion as it does skull-powdering heaviness. Surrender now, thank us later.