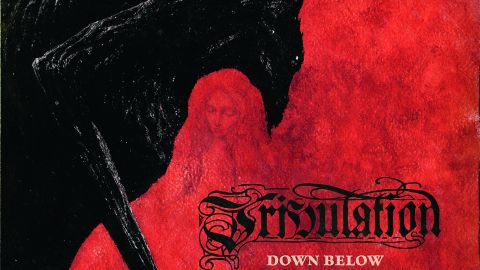 Most musicians tend to chart their own course through emotions or atmosphere, but then there are those who think more in terms of images and colours. Half of Tribulation – namely, vocalist Jonathan Hultén and guitarist Adam Zaars – are former art school students leading parallel careers as graphic designers, and it’s essential to unlock the riddle that saw them shift from feasting on the rotten corpse of early death metal on their debut album, The Horror, to what now, essentially, is a modern gothic rock record with some added harshness, essentially in the vocal department. Then again, the writing was already on the wall with their second album, 2013’s The Formulas Of Death and Down Below is just its logical, albeit even more stripped-down and bold, conclusion. If, visually, Tribulation have gone from childish black and white hand-drawn demo covers to highly contrasted and referential gothic imagery, it’s just a reflection of their musical growth. This comes at a price, though; while discreet additional instrumentation (piano, Mellotron, sound effects) adds a few shades of grey here and there, and Down Below is not as epic as its predecessors (it clocks at the more regular album length of 47 minutes, and is easier to digest as a whole), it still sounds a tad stern at first. Unflashy and sonically quite dry, it only reveals its nature after few spins, especially on the album’s second half. It’s only once you’ve stopped looking for metal’s typical driving force, the mighty Riff, that you start to find yourself getting sucked in. To use a fitting cinematic analogy considering all the references to the vampire mythology: if this album was a movie of Bram Stoker’s Dracula, Tribulation’s approach would have more to do with Werner Herzog’s more cerebral Nosferatu The Vamypre than the grandiloquence of Stoker’s classic.