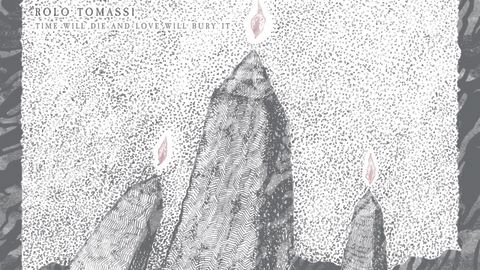 The greatest compliment you can give a band is the world’s continuing inability to define and pigeonhole them. Rolo Tomassi have been defying categorisation and expectations for the last 12 years, and Time Will Die And Love Will Bury It doesn’t disappoint in their continuing quest to confuse and amaze.

Last time we heard from the Sheffield crew, with 2015’s Grievances, they were delving deep into the darkest recesses of the soul, but this time there is a glimmer of light, the aptly titled instrumental, Towards Dawn, with its sighing melody and twinkling synths straight from the Mogwai school of thought, suggesting a newfound positivity. That’s bolstered by Aftermath, with beautifully sweet vocals from Eva Spence and a spaced-out anthem that builds to a wall of white noise.

Don’t panic, though – of course they haven’t gone soft on us, and this shoegazing start is soon usurped by bursts of frantic, disorienting mathrock and Eva’s primal howls that are more animal than human. Alma Mater, meanwhile, is a nosebleed thrasher with cruel intentions, and Whispers Among Us is a vortex of fury sent from the depths of hell, lead-heavy with a devil roar that’s fantastically discomforting to be on the receiving end of.

Their greatest trick, though, is in the moments when they bring the light and dark side together, as on A Flood Of Light, setting them against each other to create pure, blinding energy. It’s a kind of witchcraft, a wildly inventive journey into the unknown as one song flows into the next with no warning of what might be ahead. Yet again, Rolo Tomassi have proved themselves to be in a category of one.