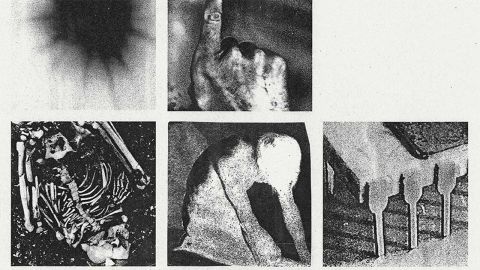 And so, we enter the third act: the final piece in Nine Inch Nails’ cryptic puzzle of darkness and loathing. Proceeded by 2016’s Not The Actual Events and 2017’s Add Violence EPs, Bad Witch has been deemed an album by Trent Reznor himself, despite it consisting only of six tracks. But over its 30 minutes Trent’s vision is realised, completing his trilogy’s intense, mind-warping endgame that refuses to fit any shape or mould. This is music in its rawest form, an expression from deep within, without any care for convention or crowd-pleasing – and it is excellent.

The opening, fuzzy, distortion-heavy Shit Mirror sets the tone for the record. It embraces the minimalistic side of industrial and electronic music, manoeuvering a simple beat into new, unrecognisable positions, backed by claps and whirrs. It’s oddly soothing and subdued, welcoming you into a trance-like state of noise nirvana, before Trent sends all senses flying, fiddling with the panning to disorientate and muddle your mind, like the music is playing from the back of your skull. This isn’t so much a song but a proof of concept for what is possible if you dare to step outside of the box and embrace everything at your disposal.

Working with his writing partner Atticus Ross, it’s impressive and maybe concerning the level of pitch-black tension and fury poured onto the album like thick tar. And yet it never feels morose or downbeat, the swaggering breaks of Ahead Of Ourselves ooze coolness and the bubbling, lava lamp electronics of lead single God Break Down The Door would fit right at home at any industrial/goth night, complete with Trent’s smooth-as-silk croon of ‘Remove the pain or push it back in’. Of course, all of this ‘accessible’ music is juxtaposed by the sudden, jarring drops into heaviness and distortion, even incorporating a guitar, despite Trent previously vowing to never pick one up again.

Perhaps the most abrupt and detached section of Bad Witches comes in the form of Play The Goddamned Part, a ‘song’ you won’t be adding to any party playlists. What begins with the sound of a building falling over on an old Mega Drive game is offset by the creeping, ominous brass section, entering the fray like the mops in Fantasia, creating a discordant, freeform jazz jam amidst clashing electronics. It’s anti-music, but your brain is so fixated on what the hell is coming next from this mad scientist of sound that you can’t turn it off, not matter how loudly your neighbours protest. A blur of clicks, ticks and a what sounds like deranged ice cream van send you tumbling down a rabbit hole so bizarre Alice would crap herself upon entry.

The final two tracks resemble more film scores than anything approaching a hit single. Hovering around the seven-minute mark, I’m Not From This World is a reverberating heavy, rumbling drive into darkness, so droning and hypnotic you’ll welcome the abyss with open arms. Yet it’s the grand finale of that explores all flavours of electronics. Over And Out could have easily descended into aggrotech twinkles with a knowing wink, but instead builds into a cacophony of white noise, as Trent sings ‘I’ve always been 10 years ahead of you’. Who? We do not know, but it’s hard to argue he’s not talking to every single musician on Earth.