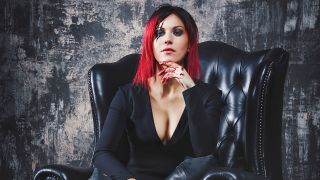 When we started Lacuna Coil in Italy, a career in metal was unheard of

“We started to make music because we love to sing and we love to play, but it was almost impossible to even remotely think about having a career out of it coming from Italy, from a land with no rock and metal roots whatsoever. There was nothing happening in Italy – there were a few bands that were beginning to become popular, but it was actually really rare. When it happened to us, to be projected immediately into an international market, on a tour with Moonspell who were already pretty big back then, without having any kind of experience and not even a record out, it was absolutely surreal.”

“Back in 1997, we shipped our demo through the post to the labels we were interested in and [Century Media] actually sent us a fax telling us they were interested in us. The boss of Century Media decided to come to Italy to talk to us, and we spoke in my brother’s shop where I was working. It was a clothing store selling hip hop clothes and a little bit of dark clothing. There were no chairs or anything, so we all sat pretty much down among the clothes and rails wherever we could in the store and started to talk. We were interrupted every time someone came in. It was surreal.”

My scariest experience was when our trailer hit the tourbus

“We were in the States and all of a sudden the trailer detached. We woke up to this BOOM! We realised we had been lucky we didn’t kill ourselves, and didn’t kill anyone else on the road.”

Our first gig was terrifying

“It was in Germany and we only had four or five songs from our EP. I froze. I love to sing, but I don’t really like the entertaining part – the talking between songs. I love to meet people and love to talk to them, but when I’m onstage it’s like I’m trapped in a different dimension where I’m singing and feeling every word I say. In the beginning it was worse, because I was super- shy. I hid behind the mic stand! Back then our English was terrible, so it was difficult to communicate, too. Now I’m in my element.”

Getting signed to a label straight away was crazy

“We signed in 1997, by December 1997 we were on tour with Moonspell, and the first record came out in 1998. That was our first experience as a band. Nobody knew who we were or knew our music, but we were already on tour around Europe. It was kind of surreal and kind of shocking at the same time, because of course we weren’t starting from being a local band – we were already in a big world and already exposed to a big audience. That was really good for us. Because it was an awesome challenge, we had to bring out our balls from day one because the pressure was already there.”

We lost half the band on the first tour

“Our guitarists, Raffaele Zagaria and Claudio Leo, and drummer Leonardo Forti left Lacuna Coil after only three shows. That was already a crazy beginning for the band. We had only just started out and we were already having internal troubles in the band! We continued as a three-piece and with other musicians from Century Media to help us continue the tour. It was a pretty shocking beginning that taught us a lot. We had a lot of discussions and decided to go ahead, because this was our chance to get our name out there.”

I knew Lacuna Coil had made it after Ozzfest in 2004

“There was a tent selling CDs at every date of Ozzfest, and we ended up being the second best-selling band after Slipknot of all the bands that were there. The name of the band was everywhere, and we were getting tremendously successful in Europe. We no longer had the aura of the ‘Italian band’. We were an international band in every sense. The attention was super-high. That’s when we started to live off our music.”

Looking back on our last 20 years as a band, I wouldn’t change a thing

“Despite the ups and downs, I’m super-happy of where we are now. We feel amazing – we feel a new energy, like a new band. There’s a lot of attention on us, even from new generations. I would leave everything as it was. I wouldn’t change this for anything in the world.”

Our 2002 album Comalies brought us to a different audience

“We played on Jimmy Kimmel and we were on MTV2, so it opened a lot of channels. Just think of where we’re from, and that back then we were on an independent label. For a European band to make it big in the US… But I have to say, Karmacode, the record we did after Comalies, is our best-selling record. Between that and [2016’s] Delirium, it’s very close. We’re coming back!”

Producer Don Gilmore taught us to make our lyrics clearer

“You want to use awkward words because you think they’re more interesting, but at the end of the day that makes it hard to connect to whoever is listening to your music, because the idea behind the song doesn’t really come across. On [2009’s] Shallow Life and [2012’s] Dark Adrenaline, he taught us that sometimes it’s better to use clear words because then people can relate to what you’re saying. Poetic lyrics are great, but sometimes we were like, what the hell were we talking about? Now we can’t even remember. For instance, in the song Spellbound, it’s very clear: ‘I am spellbound, you cannot have this control on me.’ It’s right there.”

My vocal partnership with Andrea is Lacuna Coil’s secret weapon

“Of course we are both fighting to appear more in every song, but we’re also fighting to get the best out of every song using our voices as two instruments. With our two voices we can use such a bigger range, from aggressive to clear, angelic to demonic. We know our voices are complementary to each other. The partnership is as strong now as it was 20 years ago, and with Andrea there’s no egos. We have the same taste, the same ideas, the same goals and we approach vocals and lyrics in the same way.”