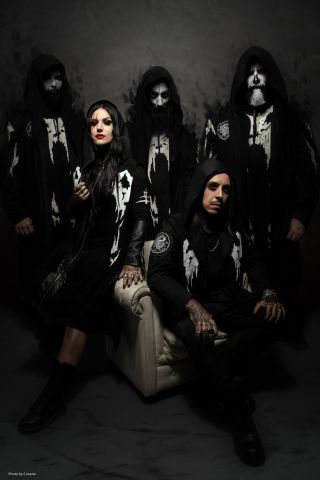 Italian gothic metallers Lacuna Coil's blend of gothic imagery, dual male and female harmonies and melodic metal melodies have made them one of the biggest metal acts to emerge from Italy.

Last month Metal Hammer and Century Media announced a collaboration which will give Lacuna Coil fans the experience of a lifetime.

On September 6, Cristina Scabbia and co will be at the London Dungeon where they’ll take fans around the exhibit, before a Q&A session and exclusive playback of Lacuna Coil’s new studio album Black Anima – more than a month before the record's official release on October 11.

This experience is understandably sold out, but their relentless devotion to bringing their music to fans worldwide won't end there.

There will be plenty more opportunities to catch the Italian outfit live, with several live performances lined up this summer and the band embarking on a UK and European tour with Eluveitie throughout November and December.

With Lacuna Coil's staggering back catalogue of (soon to be) nine studio albums spanning over two whole decades and having sold over two million albums worldwide, we thought it was high time we compiled a list of their very best songs – and who better to help us do so than their loyal followers.

So, here's your chance to vote for your very favourite track and see it appear on a specially curated list to be released in time for these very special events.

Read through our comprehensive list of Lacuna Coil's tracks and get voting! Think we've missed one? Don't worry, there's an option for your to add all those obscure b-sides we might have left out, and you can choose up to five songs in total.