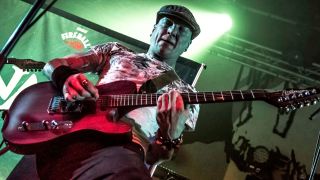 InMe have been a mainstay of UK rock and metal scene for over two decades. The band reached No. 1 in the UK Rock Albums Chart with their debut album Overgrown Eden in 2003 with help from singles like Underdose and Firefly.

Ahead of the September dates of their Jumpstart Hope tour, the British rockers unveiled their latest video single, Blood Orange Lake, premiering it exclusively with Metal Hammer.

We caught up with vocalist Dave McPherson to discover his most memorable gigs.

"I don't think I'll soon forget the moment Meshuggah tore into 'Bleed' while onstage at Download ten years ago. Even now, my jaw is still drops when I think about it.

"Obzen is my favourite album of theirs, and their live show and light show is an awesome spectacle like nothing else you're likely to see in metal. This one has stuck with me even a decade later as a truly epic performance."

"My Dad was very influential in mine and Greg's musical upbringing, making sure we could play piano and buying us guitars once we got into metal and grunge.

"Before this particular show, I remember he told a fib and pretended it was my birthday, so that security would give us access to the front row! Sammy Hagar was fronting Van Halen who were supporting and he tried to pull me onstage to no avail.

"I’m still sure Jon Bon Jovi saluted me during Always. This was one of those moments where I felt some kind of connection to the bands on stage, as I'm sure many feel when they're up in the front rows.

"Moments like that can create a really personal and unforgettable experience."

"Charlie and I covered Silverchair’s Ana’s Song (Open Fire) & truth be told, we nailed it.

"Silverchair were a key influence for me and Charlie has been involved in some of the best albums in recent years so this was a very special moment to me."

"I went with Greg to see Lamb of God at Mean Fiddler...I have many fond memories of that venue, but watching Lamb of God perform Laid To Rest there has to be a true 'peak metal moment' for me.

"I love me some metal, and Lamb of God are one of the staple bands when it comes to a brutal live show. They're loud, aggressive and out-of-this-world, but as Randy has famously belted down the microphone..."'ee who gives a f**k'."

"I remember my brother having to calm me down on the phone as they kicked into Ghost Love Score. For me, that song and this band represents the perfect combination of classical operatic music and heavy metal.

"Nightwish have repeatedly stunned audiences with their sound and style, and 2016's Download performance was absolutely no exception. Once is their seminal album for my money and Ghost Love Score is a timeless epic."

"I remember hearing Liam (drums) soundcheck and immediately knowing the band would either be absolutely awesome...or it’d be a waste of an incredibly talented drummer!

"All That Divides is a stonker in a live environment.. they’re insanely amazing and well worth the ticket price."

"I was told off for being too excited at this one, but how can you keep your cool when you're presented with one of England's premiere metal bands, in the flesh?!

"Football chanting is an understatement for Maiden crowds, they are absolutely insane when it comes to energy and there's nothing quite like it.

"At this particular show, Iron Maiden played Blood Brothers from Brave New World and dedicated it to Dio, which was an incredibly touching and special moment for us fans."

"How can I make a list of out favourite live shows without including InMe?

"There was a proper atmosphere on the Soni 3rd stage. It's something that will stay with me long after I've hung up my microphone. The love I felt from the audience was pure and lasting, our supporters are hardcore and have stuck with us.

"I remember playing Saccharine Arcadia live here for pretty much the first time, which has to be one of my proudest moments to date. I can't wait to get back on the road soon."

"This was my first live experience of metal and they blew me away! We were all proper into nu-metal back then and Soulfly to my young mind was the greatest, heaviest live show that the planet had ever witnessed!"

"We played the main stage (opening I think) and I remember having zero voice before the show. One placebo effect of reiki later and my pipes returned.

"Nothing compares to playing to that many people, and I was young and wide-eyed so perhaps didn’t appreciate the grandeur of the event as much as I do in hindsight. What an honour it was to play this festival."

InMe's new single Blood Orange Lake is available to purchase and stream. The band will embark on their Jumpstart Hope tour in early September. Tickets are on sale now.