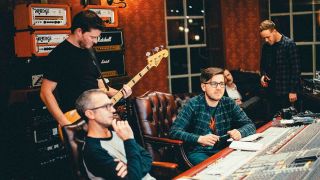 After releasing one of the most promising debut albums our scene has heard in some time in 2016’s Statues, Brighton quartet Black Peaks’ sophomore effort is undoubtedly one of 2018’s most anticipated releases. We spoke to frontman Will Gardner about what to expect, their growth as musicians and how they’ve become even more politicised.

So, the new album is finished, what does it sound like?

Will (Gardner, vocals): “We’re so excited to get this record out, and we all feel like it’s a quantum leap forward from the first album. Don’t get me wrong, we’re all really proud of that record too, but it’s just a decent post-hardcore album if I’m being honest. This one is… it’s just more… it’s bigger. There’s more space between the riffs, it’s definitely far heavier and it’s us really nailing down our identity.”

Statues was a very diverse record. What kind of influences have you honed in on musically this time?

“I think we’ve gone more down the heavier, more progressive route. We’ve all been inspired by bands like Tool, Mastodon, Cult Of Luna and those are the kind of things we’re aiming towards. It’s odd; we got a bit of radio airplay on the last album, but if you think we’re aiming for more of that then be warned, because we’ve basically gone in totally the opposite direction.”

Statues also had a dystopian future concept behind it. Is this another concept record?

“No, it isn’t. We toyed with the idea of it, but the last record was only really conceptual over four tracks of the record and, although I did think about doing something similar, Joe [Gosney, guitar] said to me, ‘Why do the same thing again?’ And he’s completely right. We don’t want to get stuck doing the same thing over and over again, every album is going to be different.”

So, it’s no dystopian future this time?

“Well, look around you? Is there any point in writing about a fake dystopian future when we’re basically living in one right now? I think that’s one of the major changes for us in mindset as a collective band this time. Last time the concept was basically just seen by the other guys as, ‘Oh yeah, Will has all these weird political ideas.’ Whereas now all of us have really woken up to how horrible the world is – sexual abuse, racism, fascism, division of society… how can you ignore this stuff? I know there are bands out there that talk about it, but it’s not as prevalent as it should be and we’re happy to stick our flag in the ground and be a band that stands for something. So, lyrically, that’s something we all wanted to address.”

How was the actual recording process?

“It was incredible, really great. The last time we were in a studio we didn’t know how to make an album, but we feel like we’re getting the hang of it now. Last time we just recorded some songs, now we went in to make an album, you know? And we worked with Adrian Bushby, who has an insane CV, and was going crazy the whole time! He was literally screaming, ‘Oh my god! This is the best thing I’ve ever worked on! You guys are geniuses!’, and he’s worked with Foo Fighters, Muse, Placebo, Skunk Anansie… big names. He said to me one day when I was in the vocal booth, ‘I’m gonna wear my pink suit when I go with you boys.’ I was like, ‘To where? What are you talking about?’ He goes, ‘The Grammy’s! See you there next year, lads!’ Ha ha ha! I hope everyone is as excited about it as him.”

The new Black Peaks album will land later this year.