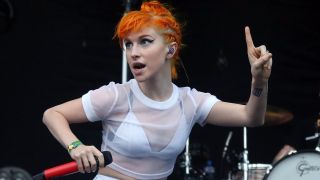 There’s a lot to be said for vinyl. Too much, if you’re one of those sighing types who roll their eyes at the mere mention of the word.

But stop stroking your futuristic MP3 player. You’re missing out. There’s the ritual of taking the disc carefully from its sleeve, giving it a little kiss, placing it on the turntable and dropping the needle on the lead-in groove. That’s nice, isn’t it. Don’t forget to put the sleeve carefully on the table. We’d hate to mark the cover, wouldn’t we?

Then it’s time to sit back and enjoy the superior audio quality. Yes, I went there. It just sounds warmer, right? I’ll fight you if you say otherwise. But not anywhere near my record collection.

Bugger. I didn’t check what speed the player was set at, did I? It’s all slow and a little bit creepy, like the tail-tucking villain Buffalo Bill in The Silence Of The Lambs. But wait, it sounds different.

That’s exactly what happened to Paramore fan Tom Aylott, who’d settled in to listen to the Tennessee pop rocker’s single crushcrushcrush and discovered it was playing at 33rpm instead.

He’s uploaded his discovery to Soundcloud and describes the slower version of the 2007 release as a “missing goth rock mega hit”. We’re inclined to agree.

Here’s the original video if that caused alarm or creeped you out in any way.