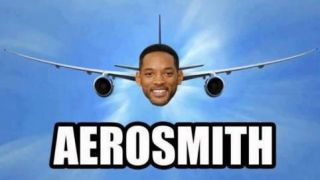 Talk about making a grand exit. Aerosmith have announced a farewell jaunt around Europe, which they’ve cruelly saddled with the title The Aero-Vederci Tour (wince, sharp intake of breath… and continue). Obviously, when faced with a pun so heavily laboured its waters have broken, it’s fully dilated and it’s huffing on gas and air, we couldn’t let it pass by without rounding up some of the greatest memes the internet has to offer Steven Tyler, Joe Perry and the gang.

Oh, Really High Guy, in your addled mind you know exactly what you mean. Shortly after this, he went on to laud the vocal talents of Tyler Durden and the guitar prowess of Katy Perry, scoffed a family-sized bag of Revels and then fell asleep on the floor after exhausting himself with a fit of giggles at a pigeon he spotted outside on the window sill. Don’t do drugs.

In 1992, American pop-soul duo Charles & Eddie appeared on Top Of The Pops singing their hit Would I Lie To You?. As they opened up the song with the lyrics ‘Look into my eyes, can’t you see they’re open wide’, the nation responded: “No, Charles, I can’t, you’re wearing impenetrable shades indoors.” It’s a lyrical plot-hole Steven Tyler has clearly learned nothing from. Or maybe he’s been chopping chillies and then rubbed his eyes. That really hurts.

This impressively muscular bird of prey is auditioning for a forthcoming collaboration between David Attenborough’s Planet Earth and The X-Factor. Look, he’s even hawked-up the lyrics to Walk This Way and perfected the Steven Tyler strut. What a badass. Shits all over the lemur’s version of Cryin’ that’s coming up next.

He’s back! Good old 18th century French artist Joseph Ducreux with his self-portrait Portrait de l’artiste sous les traits d’un moqueur is a god amongst memes, which is presumably why he looks so chuffed with himself. This time around, he’s imploring us to walk this way, talk this way… “this way” being the kind of florid old-time speak that would’ve got Marie Antoinette all hot under the collar. Before she had her head chopped off, obviously. The collar wasn’t much use to her after that.

Let’s keep it simple. Simple works. We particularly like the use of musical notes here, just to up the karaoke ambience of Aerosmith’s big busking adventure. You just watch, they’ll do Wonderwall next – always good for raking in the spare change from shoppers on their way to Gregg’s for a steak bake.

Aw, look at Will Smith’s little face. He’s the most adorable sentient aircraft since Sarah Ferguson introduced us to Budgie The Little Helicopter in the 90s. We already know Aerosmith are partial to a hip-hop collaboration, so perhaps the in-flight entertainment will feature them performing a rocked-up take on Gettin’ Jiggy Wit It alongside the Fresh Prince.

And that’s why you set off five minutes earlier than you think you need to, Bruce. Honestly. Imagine if you’d been so unreliable in Armageddon – you’d still have been putting your socks on when the asteroid flattened us all into a fine paste.

Nana Tyler is just not going to take any of your nonsense. Just look at the withering wisdom and innate bullshit detector our Steven would have if he was an sweet little old lady. We wouldn’t dare try and change the channel during Bargain Hunt.

The resemblance between Steven Tyler and the blue dragon thing from Pokemon is so uncanny, there are gangs of kids outside his house waving their phones around and trying to catch him as we speak. It’s okay, he’s singing Dream On at them assuming it’s the lighters-aloft moment at a gig.

Confession Kid lives in a world of embarrassed confusion. It’s okay little facepalming buddy. We thought there was someone on the Starship Enterprise called Captain Slog, so who are we to judge? And Arrow Smith would be a great superhero alter-ego for Steven Tyler. And honestly, given the fact he survived the 70s, that’s not beyond the realms of possibility.