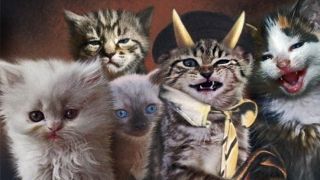 This week, our team of mirth researchers have been scouring the internet for AC/DC memes. There’s a lot of them – but there aren’t as many jokes about school uniforms as you might think. What the internet’s done instead is throw some sweet curveballs, which focus on pun-loving cats, massive wrecking balls and a subtle joke about the rivalry between two long-dead scientists.

Here’s Chemistry Cat making their TeamRock debut with a strong electricity pun. It took a bright spark to come up with this gag. That’s a shocking joke. Sorry. We’ll stop.

If you’re lucky enough to have the surname Young, then you’ll be all-too-familiar with the joke below. So spare a thought for the 61-year-old guitarist, who’s probably heard it more times than anyone else. It’s not funny and only serves to remind us of our own mortality. Cheers.

When Axl Rose was announced as AC/DC’s vocalist for the remainder of their 2016 world tour, some people were compelled to write inflammatory comments on message boards, social media and across their own face in marker. To counteract the waves of negativity, TeamRock created a batch of positive memes for the Guns N’Roses singer’s benefit. We felt really good about ourselves that day.

Anything to do with cats spreads like fleas on the internet. Replacing the members of AC/DC with cats on the cover of their 1979 album Highway To Hell was a masterstroke. They even found a cat with Phil Rudd’s stare. Look at the little fella. It’s that attention to detail which makes all the difference. After all, horned cats wearing a cap and tie are ten a penny.

Another meme star making their TeamRock debut this week is Karate Kyle. Since first appearing on the internet in 2011, this fictitious martial arts enthusiast has quietly implied acts of violence after incidents of bullying, which includes mocking his favourite Aussie band. Don’t mention his glasses or you might enter a world of pain.

Pop fans lost their mind when they saw Miley Cyrus sitting on a wrecking ball in that video. But we all knew that Brian Johnson was doing it – albeit with clothes on – years before that. Interesting fact: there’s an area of Gateshead called Wrekenton which very close to Johnson’s birthplace of Dunston. Coincidence?

Here’s fancy TeamRock meme regular Joseph Ducreux with his long-winded take on Let Me Put My Love Into You or something.

So it turns out that Lord Voldemort was only helping Harry tell the muggle world who his favourite rock band were. Well, that changes everything, doesn’t it, nerds? With your little cloaks and conventions.

According to the meme overlords at KnowYourMeme.com, this four-panel strip is known as ‘(•_•) / ( •_•)>⌐■-■ / (⌐■_■)’ or more simply, Puts On Sunglasses. While we haven’t seen every episode of Crime Scene Investigation: Miami, we’re pretty certain Horatio Caine has said something like this before. He must have.

Even owls with a degree love this meme, featuring portraits of science poster boys Nikola Tesla and Thomas Edison. A quick Google reveals Tesla favoured an alternating current, while his rival Edison believed a direct current was safer. AC and DC. Right. Clever that. What we do know is that Tesla went on to enjoy success with hits like Love Song, Signs and Edison’s Medicine.