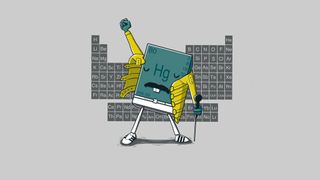 Over the course of their 46-year career, Queen haven’t exactly been shy about sending themselves up in their iconic videos, so it’s no real surprise that there’s a fleet of majestic memes with their name all over them…

Let’s crack open this treasure trove of Queen-based mirth with a meme inspired by a single taken from the band’s 1974 album Sheer Heart Attack. Here’s an image of our beloved monarch demonstrating her prowess on the battlefield. Good shot, ma’am.

This self-portrait by the French artist Joseph Ducreux has inspired many memes. Some might say too many. This time, the long-winded dandy has turned the first four lines of Bohemian Rhapsody into something that’ll take the length of the original song to recite. It’s amazing anyone finished a conversation in the 18th century. Maybe that’s why they settled arguments with pistols. Quicker.

Actor Jonathan Goldsmith, who appeared as ‘The Most Interesting Man in the World’ in this suave ad campaign for Dos Equis beer, has been replaced by Freddie in this perennial meme. Here then, is a pleasing nod to Queen’s 1989 single I Want It All. So, here’s to the future, hear the cry of youth. Cheers.

This Lego likeness of Freddie Mercury is the work of the steady-handed folk at The Living Brick. Taking their visual cues from the clothes he wore during their legendary 1986 Wembley Stadium gig, they’ve recreated that yellow jacket, white trousers and his sceptre mic stand. Some wise-ass slapped a pun on it and – BOOM! – a meme was born.

Another Bohemian Rhapsody-themed meme, created by someone who has wilfully misheard the lyrics and imaged a sea made of a popular brand of orange pop. Some may argue that it’s slightly sacrilegious, but it’s so good we couldn’t ignore it.

This image of Philip J. Fry is taken from a Futurama episode called The Lesser of Two Evils. The ‘not sure if…’ is a popular phrase template to form part of his internal monologue. Here, someone has added some of the Bohemian Rhapsody lyrics and a rubbish Photoshop job to make him look like the Queen frontman. It’s awful but still works.

Of course this would happen to Bad Luck Brian. That’s what you get for having your phone switched on at a funeral. And for having a song as a ringtone.

Who hasn’t spent hours memorising the periodic table of chemical elements on a rainy afternoon? Of course, we all know that Mercury is a chemical element with the symbol Hg. We didn’t even have to look it up on Wikipedia. Not at all.

The Philosoraptor might have a point, there. But the German scientist Daniel Gabriel Fahrenheit is widely considered to have invented the mercury thermometer. Perhaps Don’t Stop Me Now could be about the excitement the boffin felt as he was nearing the completion of his gadget. Plus, celsius doesn’t rhyme with ‘speed of light’. It’s probably that, to be honest.

Hipster Kitty has been a smart arse from day one. Scratch that, they probably were before that. Still, with a brain full of trivia like that, they’d be handy to have on a pub quiz team. Would a cat in a scarf be too much of a distraction in a pub full of competitive drunks?