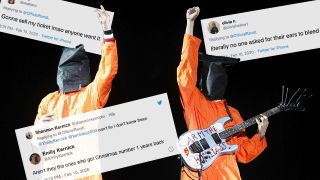 Reading and Leeds festivals were formative for us moshers growing up in the UK. The festivals were a right of passage – three days of unadulterated shenanigans with your besties, (underaged drinking) and a line-up of killer rock acts from indie and alternative to metal.

In the 59 years since their humble beginnings as a jazz festival, the bank holiday music event quickly added rock'n'roll to their repertoire after the Stones appeared as headliners in 1964.

Legendary line-ups have included Black Sabbath, Iron Maiden, Motorhead, Mastodon, Metallica, Guns N' Roses, My Chemical Romance, Nirvana, Faith No More, System of A Down, Slipknot, Pearl Jam, Linkin Park and some band who scored a Christmas number one back in '09.

But at some point something changed. Reading and Leeds went from rock festivals to... well, normie fests. As the years have progressed, more and more non-rock mainstream acts have been added to the bill, and the festivals' legacy appears to be lost – at least by teenagers.

Yesterday, Rage Against the Machine were announced as headliners for this year's festivals, alongside Liam Gallagher and Stormzy, and teens are outraged. Outraged at the announcement of a seminal 90s rock band who have stormed the stages at Leeds and Reading numerous times before. In '93, '96, before their breakup in 2000 and again in 2008.

These Gen-Zers have taken to Twitter, of course, to vent their RAGE at the announcement and we've dug out the funniest (and most terrifying).

This guy who thinks RATM fans are goths

If you think I am paying upwards of £250 to have goths scream in my ears you are desperately wrongFebruary 10, 2020

...and this girl who doesn't know what cyber goths are

This Gen-Z kid who doesn't even know who RATM are

can u put all the goth ones on a separate stage pleaseFebruary 10, 2020

Why, Lorun? We don't understand...

James was holding out for Billie Eilish

@james_dacres we should've waited for the lineup 😂February 10, 2020

Mate, we've been praying for a decade

Is she referring to Liam Gallagher?

literally no one asked for their ears to bleedFebruary 10, 2020

Glad to see our vote counted

Aren’t they the ones who got Christmas number 1 years backFebruary 10, 2020