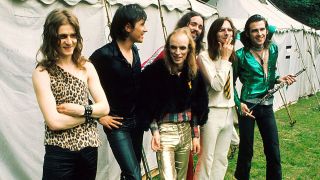 "People might be surprised to read this, but I was very heavily inspired by progressive music when I was younger. I listened to so many different artists that it’s very tough for me to talk about just one. It seems almost insulting when there are lots who had an effect on me when I was in my teens.

"I have to make an honourable mention of Keith Emerson. The way he used classical music with ELP on albums like Tarkus had a massive impact on me. But I’m going to celebrate Roxy Music here.

"I can’t exactly recall when I first heard them, but I would think it was on a southern German radio station which played a lot of prog. What I loved about them was their fearlessness and delight in experimenting.

"If you listen to them now for the first time, then you might wonder what all the fuss is about, because what they did sounds like no big deal in 2017. But in the 70s, it was radical and exciting, and they were pushing the boundaries without any concern for commercial compromise.

"Phil Manzanera’s guitar playing made an impression on me as a budding musician, but it was their all-round style that impressed me most. They became more mainstream, but in those early days there was nothing quite like Roxy Music.

"I got into them through their second album, For Your Pleasure, and then retrospectively discovered their self-titled debut. And there’s no doubt they had an influence on what Celtic Frost did on our [re-released] albums Morbid Tales, To Mega Therion and, especially, Into The Pandemonium.

"If I have to select the best Roxy Music album, then it would be For Your Pleasure. What sets this apart from the rest of their catalogue is the songwriting; it’s of the highest calibre, and is very powerful. If you combine this with the band’s devotion to being individual and cutting edge, then you have a very potent album that, to this day, still resonates with me.

"There are so many progressive artists to whom I owe so much. But Roxy Music are one band that I would always choose as being a major part of who I am today."