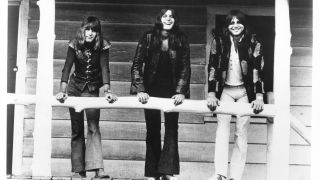 For Emerson, Lake & Palmer the year 1971 represented an opportunity to establish that this union of three giant talents was more than a mere supergroup, but the chance for the band to become a firm fixture on the prog scene. Their self-titled debut album from the previous year had displayed some spectacular performances, even if the songs themselves had been a little uneven. Tarkus was their opportunity to address that.

What was to give this album its tone, timbre and colouring was the epic title track, which, with its seven movements, took up the whole of the first side of the original vinyl. This was a bold step for the band, and one that relied heavily on Keith Emerson’s compositional dexterity. In fact, it was the keyboard player who came up with the musically complex composition in the first place.

“After the release of ELP’s first album and during the live recording of Pictures At An Exhibition, it was coincidental that Carl Palmer and I were working individually on the same sort of complex rhythm ideas,” recalls Emerson. “He was doing this on his practice drum pads, while I was at home on an upright piano in London and a Steinway in Sussex. As my ideas seemed to complement what Carl was up to, I pursued this direction.

“We focused on a centrepiece first to establish a concept. Sometimes we didn’t know if it would become a conceptual piece of work at all. All of the compositions had to bond and work together, and if they didn’t they were used somewhere else.”

For this 20-minute exposition, Emerson drew heavily on the work of both Frank Zappa and the Argentinian classical composer Albero Ginastera.

“I was a huge admirer of Frank Zappa, and had met him on a few earlier occasions when he wanted my advice on how to cope with English orchestras. Frank was of the opinion that there really should not be time signatures. That’s how I felt. Why be governed and dictated to by a 4⁄4 or 3⁄4 rhythm by adding or subtracting notes just to make it fit?”

Ginastera’s inspiration is also readily acknowledged by Emerson. In fact, he was to adapt the Argentine’s first piano concerto under the title of Toccata for the 1973 album Brain Salad Surgery. Ginastera absolutely loved this adaptation, claiming that Emerson had captured the true essence of the piece.

Over the years, there have been suggestions that some of the arrangements and compositions in Tarkus were lifted from other sources, with Ginastera in particular falling foul of the band’s cuckoo-like impulses. A suggestion that has plagued ELP and Emerson for more than four decades.

“I wish to point out here that there is no plagiarism and no line of Ginastera or anyone else’s used in my composition. There is a slight bow in the direction of Prokofiev in Eruption (the opening movement) where I transposed a fleeting run of one bar from the Allegro of his Third Piano Concerto in C, as it helped the transition and my wish to not have any key or time signatures. In some way I was searching for a kind of musical Esperanto – but that soon diminished.”

In the end, Emerson presented virtually the whole of Tarkus as an almost completed composition to Palmer and bassist/vocalist Greg Lake. All that was missing the lyrics, which Lake added later. Lake, however, was less than enthused by what Emerson had come up with, as Emerson now admits.

“I don’t think Greg was too enthused, because at that time I hadn’t written any ideas for a song. But he settled into producing it, while Eddy Offord engineered, at Advision Studios, London.”

Lake knuckled down, eventually taking inspiration from the album’s infamous artwork as the starting point for his lyrics. Emerson, for his part, vividly remembers the first time he saw the cover that became so entwined with the album.

“One day I walked into the studio after my long drive from Sussex. Greg and Carl were looking over the artwork of an artist that had just dropped by [William Neal]. We were all fascinated by his artwork, particularly the armadillo with cannons and the dodo bird with guns on its wings like a Spitfire.

“To everyone, it represented what we were doing in that studio. The next day on my drive up from Sussex the imagery of the armadillo kept hitting me. It had to have a name. Something guttural. It had to begin with the letter ‘T’ and end with a flourish.

“Tarka the Otter may have come into it, but this armadillo needed a science fiction kind of name that represented Charles Darwin’s theory of evolution in reverse. Some mutilation of the species caused by radiation… Tarkus!”

With the vision now in place, Lake delivered some of the most potent lyrics of his career. But the album was about a lot more than just the elongated title track. The second side was a more conventional collection of six songs, ones like Jeremy Bender, which has its roots in Americana.

“Yes, it was our adaptation of the traditional song Oh, Susannah and even has a nod towards the great 20th century American pianist Floyd Cramer, who was always a favourite of mine.”

Battlefield features a rare electric guitar solo from Lake and, Emerson admits, “Was certainly inspired by (Lake’s former band) King Crimson. We even used to do part of that band’s Epitaph when performing Battlefield live – that was co-written by Greg.”

One of the most emotive songs, The Only Way, is based on music by Bach, with extra elements from Emerson and Lake. It features the challenging line ‘Can you believe God makes you breathe/Why did he lose six million Jews?’. This made Emerson and Palmer a little uncomfortable.

“Carl and I thought the religious implication was a bit strong, but we went along with the question although it was a disturbing one.

“The music of Bach had always played a part in my musical inspiration, right from when I had a little jazz trio in Sussex. For The Only Way I found a church with a pipe organ and had fun holding down the F bass pedal while I played Bach’s Toccata in F and then utilised the Sixth Prelude piece over it.”

There was even a note of welcome jocularity brought right at the end with the song Are You Ready Eddy?, one of only two songs to be composed by the entire band (although it is based on the 1956 Little Richard song The Girl Can’t Help It), and is about the band’s engineer Eddy Offord.

“It’s a phrase we’d yell out every time we were ready to record.”

It also features Palmer shouting out the message, “They’ve only go’ ’am or cheese!”. Presumably not just for posterity.

“As with most ELP albums when completion is just around the corner, we relax and had fun, like a wrap party.” Says Emerson, “On the corner of Gosfield Street in Central London, where Advision was situated, there was a sandwich shop. Advision was very basic and didn’t have a studio canteen. We used to send out the elderly lady, who was a mixture of Greek and London Cockney, to pick up the order. Carl thought she was hilarious and used to mimic her wonderfully, especially when she poked her head round the studio door to announce that the sandwich shop only had ham or cheese. She seemed to speak down her nose and drop her ‘H’s and ’T’s, so it came across like, ‘They’ve only go’ ‘am or cheese. We used it on the album, which caused much confusion with the Americans who couldn’t understand what we were on about.”

The album was released in the UK on June 14, 1971, appearing two months later in the US. It’s one of only two ELP records to reach the Top 10 in the States, making it to number nine, while in Britain it’s their only number one album. It still remains one of the most satisfying and demanding of all ELP albums.

For Keith Emerson it’s still one of his favourite albums, not least because the title track has taken on a life of its own. A version by the Tokyo Philharmonic Orchestra, recorded live in March 2010, has been released under the title Tarkus – Classical Meets Rock, and the keyboard player is delighted with the compliment.

“Back in 1971, I would never have thought that a Japanese Orchestra would bring my composition to the symphonic stage, and I am most honoured that they did so.

“Behind it all I always carried Ginastera’s ideology in my head. If he’d managed to get orchestras to play his way, then I would also try. The track Tarkus is still one of my favourites to play in any format.”

This article originally appeared in Prog #17.

For the full story behind the artwork that accompanied the album, then click on the link below.