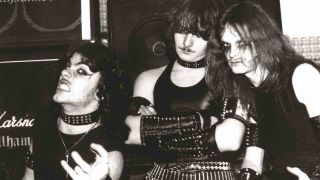 The early 80s marked a huge leap forward for metal. In the UK, the grassroots NWOBHM scene was taking root in pubs and clubs across the country, launching future superstars like Iron Maiden. Bands and fans were hungry for music that was harder, heavier and rawer than anything that had come before.

Things were very different in Switzerland, where there was barely a scene to speak of. One young Swiss metal fan, Thomas Gabriel Fischer, was looking longingly at everything happening in UK and wondering what the hell was going wrong – and what could be done about it.

“While the international metal scene was being completely rejuvenated with the New Wave Of British Heavy Metal, Switzerland was exactly the opposite – if you could even speak of a scene,” explains Fischer today. "The musicians here turned in circles and the biggest Swiss band at the time was Krokus.”

A textbook meat’n’potatoes early 80s metal band, Krokus’ international success nonetheless spawned a host of imitators back in their homeland. But Tom wasn’t interested in copying someone else, and instead decided to take matters into his own hands. Along with a pair of co-conspirators, vocalist and punk aficionado Urs Sprenger and drummer Pete Stratton, in 1982 he formed a band that would inadvertently revolutionise metal: Hellhammer.

“We were collectors of NWOBHM singles and demos, and we loved underground, we loved new wave, we loved punk, and for us, the local scene appeared extremely boring,” says Fischer, who christened himself Tom G Warrior (Sprenger changed his name to Steve Warrior). It was like a scene of inbreeding and there was no fresh air.”

At a time when the metal and punk scenes were still divided, the trio fused the raw energy of Discharge and the Satanic NWOBHM of Venom with a hefty amount of teenage angst and adrenaline.

“Almost all of us had very difficult conditions in our private lives,” Tom explains, “and I think first and foremost we tried to deal with this, and tried to express it with our music.”

That music was the most lo-fi, raw, punk-fuelled noise imaginable. Hellhammer’s first two demos, Death Fiend and Triumph Of Death – both released in 1983, made Venom’s rough-arsed racket sound refined. This was the first true glimmerings of black metal. And the Swiss metal scene hated them.

Tom: “We felt like a bunch of outcasts. We felt like we were the only ones to follow a different pattern, to seek a different horizon. We were shunned by everybody. Bands like Slayer, Metallica, Exodus were either not yet formed or were just in the demo stages. The metal scene was a very wide scene, but there was no extreme metal scene.”

Where lesser bands might have caved in, it only steeled Hellhammer’s resolve. They didn’t need anyone else.

”The more we were outcasts, the more we felt we were our own unique group of people,” says Tom. “And the more we felt; ‘Okay, we’ll create our own world and screw them all.’ It really made us independent and made us more fierce and fanatical. It became a circle of action.

“And at the end of the day, this really helped. Had we been accepted, maybe we would have sounded like all the others. But because we were left to our own devices, we basically came up with our own style, and that, of course, was a huge advantage over all the Krokus clones.”

“At the time there was no Internet or anything like that, and there were maybe one or two heavy metal magazines,” says Tom. “So we took our record collection, turned the records around and wrote down all of the addresses of the record companies of our favourite bands, and then sent them our demos. And all these companies were, of course, in other countries - from America to Germany to the UK.”

There were rejections – lots of them. But one label eventually gave these upstarts a chance. Berlin’s Noise Records had been founded as an offshoot of a punk label, and they didn’t recoil at what Hellhammer were doing – far from it.

“They said, ‘Well, you look radical and we're looking for the most radical metal band in the world and you look like it, so let's try this,’” recalls Tom.

There was one condition. The band had to record two new tracks for a compilation album to prove they were worth a shot. Rising to the challenge, they made the Satanic Rites demo in an attempt to convince Noise that they were worth it. It did its job.

“They said ‘Well, the demo sounds actually very good, so let's not just do the compilation, but also do an EP,’” says Tom.

The EP would be released in 1984 as Apocalyptic Raids, by which time Steve Warrior had been replaced by 15-year-old bassist Martin Eric Ain. It was met by journalists and fans alike with much the same reaction that had greeted their early demos: a mix of bafflement, horror and mockery.

By then it didn’t matter. Within three months of Apocalyptic Raids’ release, Warrior and Ain had split Hellhammer, feeling that they had outgrown its primitive noise. The pair re-joined forces in Celtic Frost, a vehicle for their musical vision.

Frost would swiftly become venerated as one of the great visionary bands of the 80s, leaving Hellhammer in the shadows. Even Fischer seemed embarrassed about it – in interviews at the time, he spoke about his former band like the twisted nephew kept locked in the attic.

But as the Scandinavian black metal scene began to take root, Hellhammer’s unholy name was gradually dragged into the spotlight. Corpse-painted malcontents such as Emperor and Mayhem citing the Swiss band as an influence. Three members of the latter even took their names from tracks from the Satanic Rites demo: guitarist Euronymous and first two singers Maniac and Messiah, while their drummer Jan Axel Blomberg went the whole hog and christened himself Hellhammer.

Tom himself was unaware of the esteem his old band were now being held in. “At that time I lived in America, and I really didn’t hear much of what happened in Europe,” he says. “And when I returned in 1994, I was completely blown away people contacting me out of the blue, talking about Hellhammer all of a sudden. It was completely the opposite of the situation that had existed before.

“It took me quite a while to look at the music like a fan does - solely in an abstract manner. And then, of course, I felt very happy that people accepted it at all. And I myself could accept it as well. But it was quite a process for so many reasons.”

Today, Tom has fully made peace with his past to the point where he put together a new band, Triumph Of Death, to play Hellhammer songs.

“It wasn’t really something I considered for quite a while, even though these songs of course, were hugely important for the path of my life. But by the time I had come to terms with it, I had a career with two other bands. I realise very well how important some of these certain songs are.

“And when I play some of these Hellhammer songs on stage, it’s very obvious to me that the route to the current Triptykon music is there. There are certain elements in these songs that I totally recognise, even nowadays in my songwriting. So to me, it really is a bridge that spans my entire life and it’s no longer just something of the past or something abstract.”

Hellhammer’s Apocalyptic Raids has been reissued on vinyl and CD