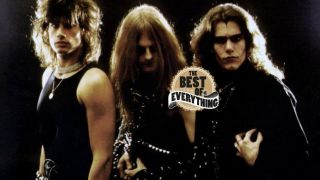 The influence of Celtic Frost on the extreme metal scene is undeniable. Since forming, the Zürich band – led by Thomas Gabriel Fischer (then opting for the surname Warrior) – released six albums and two EPs.

The band had a particular impact on a young metal fan in West Yorkshire called Nick Holmes. Here, the Paradise Lost and Bloodbath frontman whittles down their output into 10 essential tracks…

10. GROUND (Monotheist, 2006) I have to say that this album came too late to save their career. Mostly, the album sounds as if the band were trying to fit in with what else was happening rather than being innovative. But Ground is an exception. It’s simplicity is a key factor, and the production is very strong. This song really hit me when I first heard it.

9. INTO THE CRYPT OF RAYS (Morbid Tales, 1984) I recall seeing this on a Swiss TV show, when the band were miming to it. I loved their look. The make-up and Tom G. Warrior’s backcombed hair. They looked so amazing, and this song sounded so fast at the time. Maybe not now, but then… it was real speed.

8. DAWN OF MEGGIDO (To Mega Therion, 1985) Firstly, I love that title. Meggido turns up in The Omen, doesn’t it? The Daggers Of Meggido are to be used to kill Damien. The song itself is grand and dark. That type’s my favourite style from Celtic Frost. And the use of timpani drums was very experimental at the time.

7. IN THE CHAPEL IN THE MOONLIGHT (Parched with Thirst Am I and Dying, 1992) I only found out recently this is a cover of a Dean Martin song. I’ve not heard the original, and don’t think I want to. It’s so quirky, and an amazing cover to do. The band totally make it their own.

6. RETURN TO THE EVE (Tragic Serenades, 1986)
No, not the original version on Morbid Tales, but the ‘Party Mix’ on Tragic Serenades, which might be a bit controversial – but I think this is better. Listening to Martin Eric Ain dicking about at the beginning is brilliant, and this is so much more powerful than the first attempt.

5. NECROMANTICAL SCREAMS (To Mega Therion, 1985) This is a long drawn out song with an impressive female vocal (from Claudia-Maria Mokri). I also have a soft spot for this, because it was the first Celtic Frost song I learnt to play on guitar. Unlike Slayer tracks, Celtic Frost ones are quite simple and easy to pick up. But this was my first.

4. TRISTESSES DE LA LUNE (Into The Pandemonium, 1987) The French version of Sorrows Of The Moon. It’s so pompous and operatic. Who else at the time would have thought about doing something like this? It was unique and far ahead of its time.

3. INNOCENCE AND WRATH (To Mega Therion, 1985) I first heard this in a record shop in Halifax called Groove Records. They’d let you listen to any records before you bought them, because they hated returns. This was the opening track on To Mega Therion, and when I put this on, I couldn’t believe what I was listening to. It was absolutely insane. Only a minute long, but the perfect intro for the rest of the album.

**2. MESMERIZED **(Into The Pandemonium, 1987) It’s my favourite song from Into The Pandemonium. It’s just so sad that I reckon I could cry if I tried hard enough when this is playing. I love the way Tom sings it and the chorus is so melancholic.

1. CIRCLE OF THE TYRANTS (To Mega Therion, 1985) Yes, an obvious choice. But I reckon I’ve played this more than any other Celtic Frost song, I’d have to go for the version on To Mega Therion rather than the one on Emperor’s Return. I love the feel of the song, and the lyrics might not make any sense, but they sound great.