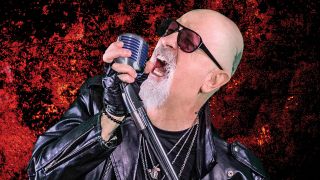 Rob Halford is ready to go when Hammer calls to ask him your questions. “I’ve been looking forward to this,” says the Metal God, who released a Christmas album last winter and will be fronting Judas Priest’s 50th anniversary celebrations this year.

What follows is a conversation that produces tears, laughter and interesting revelations...

Will you guys ever play songs from the Tim ‘Ripper’ Owens era?

“Why not? Those records, Jugulator [1997] and Demolition [2001] are both part of the great history of Judas Priest. And Tim is a good friend of mine. I’ve never done any of the songs that he sang on but I’d definitely have a crack at them. I’m up for that.

"When? It could happen at any time, it wouldn’t need to be an anniversary. Before we go onstage we have a jam, and that’s time when ideas from leftfield are thrown around. That’s probably how we’ll do it. It’ll just happen and it’ll be brilliant.”

“Usually it’s the ballads. I can really let rip on the screaming metal ones; I feel loose, free and comfortable on those. It’s a song like Beyond The Realms Of Death [from Stained Class, 1979], Angel [Angel Of Retribution, 2005] or the acoustic version of Diamonds And Rust [Sin After Sun, 1977] is the most difficult.

"Anything that demands an enormous amount of tension becomes harder as you get older. You really have to zone in and focus more.”

What are your thoughts on the newer generations of metal bands coming up? Any faves?

“There are so many of them, aren’t there? There’s one band I really like from Cannock and they’re called Wolfjaw – a three-piece band that’s not exclusively metal, they’re hard rock but they have great arrangements. They’ve been bashing away quietly and strongly on the underground but I think that their moment is coming soon. Give them a listen.”

What was the best opening band you had on tour?

“I don’t like using the word ‘best’ in that context. We had Iron Maiden open for us at the start of their career [in 1980] and they were brilliant. Saxon did the same and they were also brilliant. Oh god, there were so many.

"More recently we had Uriah Heep open up for us in America and they were brilliant. They’ve been around just as long as Priest and they’ve got a catalogue of incredible songs. So there’s another great example.”

Do politics have a place in metal?

“Absolutely they do and I’ve been putting my two penn’orth into Priest’s music for most of my life, but it’s concealed by smoke and mirrors. Take a song like Evil Never Dies [from 2018’s Firepower]. I make some digs there and I know what I mean, but here’s the thing, especially for a band like Priest: music is about escapism.

"If I hear one more thing about Brexit, I don’t know what I will do. To me there’s a place for politics and I applaud bands that make it important in what they do, but with me the clues are there if you want to look for them.”

“Thank you, I just put one up for Throwback Thursday! It’s of me by the gate in the place in the Yew Tree Estate in Walsall where I used to live. I’m holding a copy of the vinyl of the Killing Machine album.

"It’s a double-throwback because it was 41 years ago when that album came out. I don’t think I will be joining Twitter. It’s a place for strong opinions; most discussions that I read seem to end with, ‘Fuck off, you wanker.’ If I went on there I’d probably be banned within an hour.”

Who are your top three favourite vocalists?

“It’s a pretty straightforward choice. One would be Ronnie James Dio; I listen to him nearly every day. I’d have to pick my mate Bruce Dickinson from Iron Maiden, who is phenomenal. And let’s go with one from the very beginning of this form of music – Robert Plant [of Led Zeppelin].

"I’ve always enjoyed the bluesier elements of his vocals and the ‘Oooh’s and ‘Aaah’s that they threw in were important; they may not have been words but Planty taught me how to connect on an emotional basis with that type of phrasing.”

Was the stylistic change that led to the heavy, thrashy sound of the Painkiller album a natural evolution or more of a conscious decision?

“It was a conscious decision. The band- members all spoke between us about the need to make a statement about the metal we were making. At that moment in our career we felt it was important to pull together and create something that was truly significant. That’s why we hid ourselves away at Miraval Studios in the south of France where nobody could find us. We worked hard every day to make that album.

"One of the great lessons of having had a long life with a band is that sometimes you must do these things – sit back, take a minute and contemplate what you want to reinforce. With Painkiller we had to remind people that Judas Priest was a strong, British heavy metal band.”

"There’s also a bittersweet one regarding a photo on my Instagram. After a South American tour together we were heading back to Los Angeles. It had been a long, long flight. Lemmy had been sitting by himself and you generally didn’t want to get too close to him if that was the case, but I went and said thanks for a great tour. We had a bit of a chat and internally I felt something was going to happen. [Rob falls silent, trying to compose himself].

"Sorry… that’s an upsetting memory. I asked him for a selfie and he said fuck off, but we took it anyway and it’s the last photograph of me and Lemmy together. I still miss Lem and everything he stands for in rock’n’roll. But the music will last forever. That’s what I tell myself whenever I’m feeling down.”

What on earth made you decide to record a Christmas album?

“The main catalyst was the chance of working with my brother Michael [on drums] and my cousin Alex [Hill, the son of Priest bassist Ian Hill]. I’d always wanted to do that. I love Christmas music and I can never get enough of it, so that’s why we made Celestial.”

If you could pick just two of your favourite Priest albums, what would they be?

“With so many choose from that’s very tough, but if you put a gun to my head I’d go with Sad Wings Of Destiny and British Steel. It’s incredible that we made British Steel, which had the iconic Living After Midnight and Breaking The Law, in just 30 days.”

Of all your onstage costume changes, do you have a favourite?

“I really like the Necromancer outfit I’m wearing on the current tour, with the purple top hat and the cane. We’ve always had that element of heavy metal razzle dazzle. Ha, how the fuck did that come out of my head? But you know what I mean.”

What’s the best piece of memorabilia you have in your house?

“We’ve got a massive warehouse full of props in Leicestershire; it’s like a heavy metal Aladdin’s Cave and this question reminds me that I must go there for a mooch around. I’ve got a very treasured etching given to me by the late Maurice Jones, the promoter of the first Monsters Of Rock Festival, so I’ll go with that.”

How do you keep your voice in shape, and how has it changed?

“After 58 metal years it becomes harder and harder. Rest is very, very important. Mine has become a bit like an old Morris Minor – it takes three days to get it going but it works just fine once it’s warmed up.”