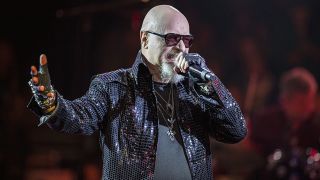 Judas Priest frontman Rob Halford says 2019 has been a great year for rock and metal.

The vocalist was speaking with Revolver when he reflected on the year, which has seen the band pick up another nomination for The Rock And Roll Hall Of Fame.

Halford says: “All I'll say is that 2019 has been another strong display of all things metal and all things hard rock, indie rock, alternative rock – however you want to call it.

“As a metalhead who's gone through decades of when it was invented to now, it makes me feel good. It makes my metal heart strong. It's what inspires and invigorates us in Priest to look to see where we might be in the future.”

Judas Priest will kick off their 50th anniversary celebrations in Helsinki on May 30 and complete the first run of shows with a headline set at the UK’s Bloodstock festival on August 9.

They’ll then head out across the UK and Europe with Ozzy Osbourne on his rescheduled dates.

Last week, Halford said he was open to the idea of former band members joining the band onstage at some point to celebrate their career milestone. "Anything can happen with Priest, he told  New York’s Z93 radio station, “So, just keep an eye out and a lookout, especially when we play live. So, yeah, it's all on the table.”

Aside from his work in Priest, Halford has also been writing his memoir and recently released his festive album Celestial.

The band will find out early in the new year if they've been selected for The Rock And Roll Hall Of Fame's class of 2020.