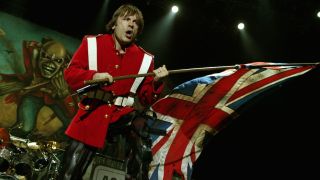 When the longlist of nominees for the Rock And Roll Hall Of Fame 2017 was announced earlier this month, it prompted a predictable outcry. For every Yes, Journey, ELO and Pearl Jam who made list, there were a dozen glaring omissions – no Motörhead, Mötley Crüe, Iron Maiden or Jethro Tull. And that’s just the tip of the iceberg.

We decided to settle the debate as to which band should have been included on the list of Hall Of Fame nominees by asking the experts – you.

The votes flooded in in their thousands, and the bands you voted for ranged from rock’s original grandmasters such as Free, Jethro Tull and Slade to young(ish) bucks like Soundgarden and Kyuss. But there was only one clear winner…

It’s easy to see why. At a time when most bands are thinking of cashing in their pensions and winding down, the British metal giants are bigger than ever in every way, from the crowds they pull to the epic scale of last year’s The Book Of Souls album. And with all due respect to Joe Tex, The Zombies and Tupac Shakur, how many other bands have their own plane, beer and monster?

There was a strong showing for some of the other bands too, not least prog icons Jethro Tull and King Crimson, plus British mainstays Judas Priest, Free and Status Quo.

The top 10 bands you wanted to see in the Hall Of Fame are:

Let’s hope the organisers are listening in 2018.