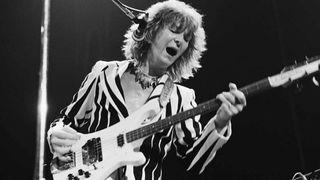 Can the tide finally be turning? Is the genre that once dared not speak its name in polite society now officially being recognised by the gatekeepers of the pantheon of greats?

Back in 2013, after years of lobbying from their ferociously loyal fanbase, Rush were finally inducted into America’s Rock And Roll Hall Of Fame, suggesting a thawing of the venerable institution’s apparently icy attitude towards prog, and perennially ‘unhip’ artists in general. Not before time, it seemed – prior to that, the only prog artists allowed into to this most exclusive of cabals were Pink Floyd and Genesis, and you can’t help thinking that the latter only got in on account of their yuppie-era 80s success.

But now, after two previous appearances on the ‘long list’ of nominees and prominent positioning in many a list of ‘notable omissions’, Yes are poised perilously close to the Hall Of Fame entrance door. Their name is on a newly announced list of nominees for 2017, which fans are invited to vote for along with the customary 800-strong group of industry grandees whose preferences have historically held sway.

If they do make it in there this time, then prog fans can surely take heart, and perhaps gently remind the Hall’s organisers that there’s plenty more where Yes came from. Can we recognise Jethro Tull or The Moody Blues’ pioneering role in the evolution of progressive rock? Or for that matter, King Crimson, who arguably made the first full-blown prog album, In The Court Of The Crimson King? Can ELP’s huge success in marrying classical flourishes, rock showmanship and technical wizardry now be acknowledged?

How about the likes of Supertramp, Kansas or Asia, each of whom took a proggy musical template and eventually turned it into timeless radio-friendly rock? Maybe the prospect of lifelong fan John Lydon inducting Van der Graaf Generator into the Hall, in a symbolic reuniting of long-estranged musical tribes, is a little far-fetched, but it’ll seem distinctly less so once Yes have received this long-awaited honour.

It’s by no means certain, of course, that the velvet rope will finally be unclipped for Yes or any other nominees waiting outside this exclusive club. They may have to queue for another year or two out in the rain as younger, prettier, more fashionably dressed applicants swan past them, air-kissing the guy with the clipboard and high-fiving the doorman.

Indeed, if the man behind the whole enterprise is to be believed, Yes’s nationality alone might still count against them. Jann Wenner, the veteran Rolling Stone publisher, is chairman of the Rock And Roll Hall Of Fame Foundation, and he, along with other senior RS-affiliated grandees of rock criticism and music biz aristocrats, has historically had a significant say in which acts are considered.

Wenner previously explained the continuing absence of bands such as Yes as an unfortunate side effect of democracy, noting, “it probably has something to do with the fact that the vast majority of voters are American” – conveniently ignoring the fact that Yes broke massively in America first, and both ELP and Jethro Tull were stadium acts there before they were in their home country.

The US bias has long been a cause of gripes, and there are few genres more European in origin and audience than prog. Indeed, other progressively-tinged British artists such as Kate Bush and Roxy Music (as well as towering European figures in other genres such as The Smiths, The Specials, Iron Maiden or Kraftwerk) are also notable absentees from the Hall.

It’s not just about nationality – look at notable Hall Of Fame Absentee Meat Loaf, who left a sizable carbon footprint on musical history with Bat Out Of Hell. It might have more to do with the fact that the cabal of people who run the whole shebang only started taking fan votes into account a few years ago (something which could stand Yes in good stead this year).

You could ask whether it really matters. After all, musicians regularly try to convince us that awards aren’t important to them – usually right up until the moment they’re given one. Well, it matters to us as fans, because it seems to reflect the fact that prog as a genre still seems to be unjustly overlooked in the eyes of the mainstream.

A few more nods of respect towards this neglected wing of the art form from the Rock And Roll Hall Of Fame might go some way towards rectifying that.