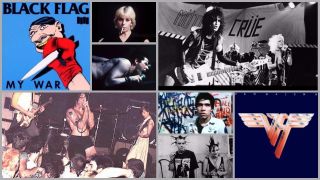 The rivalry between LA’s punk and metal fans during the 1980s was a complex and confusing one. Like the feuds between the mods and rockers in Britain back in the 60s or the punks and teds in the 70s, fashion was as critical as the music. Getting to the root of the enmity is only part of the story; equally baffling is finding the point at which both musical paths later converged. It’s like a mirage: every time it comes into sight, the next step forward causes it to disappear. Navigating the journey using signposts like hardcore, thrash, speed metal and grunge is treacherous.

To understand the hostility, it’s important to set the stage. In Los Angeles in 1980, the first wave of local punk bands like The Germs, led by the fatalistic Darby Crash, The Screamers, The Weirdos, The Bags and X had established a groundswell of allegiance among the disillusioned. “Punk in LA was reacting against the great success and dominance of bands like Van Halen,” explains Mark Vallen, an illustrator for Slash, the influential West Coast punk magazine. “Just the whole look and feel of it reeked of elitism.”

“There really wasn’t that much of a metal scene by 1980 or ’81. At that point it was kind of dormant before Mötley Crüe kicked in,” says Mullen. “Van Halen weren’t even perceived as a heavy metal band, they were just seen as this big stoner party band. All the punk rockers hated Van Halen of course.”

Penelope Spheeris, who, following The Decline Of Western Civilization, went on to success directing such films as Wayne’s World, was well aware of the rivalry. “That was very present. I think when all the punk bands had their stronghold going on, metal was considered to be a lower-class music – really old- fashioned, out of date and ridiculous.”

Henry Rollins, ex-singer with Black Flag, one of LA’s original punk bands, disagrees. “No, actually. I am not aware of any sanctioned hatred between the groups. I never really saw metal guys at the punk shows. I am sure they would potentially run into trouble at a punk show and vice versa but I was never aware of having to run from metal guys.”

Whether it was sanctioned or Rollins was aware of it, the hatred would at times erupt into violence. David White, an LA screenwriter and one-time Fear roadie, recalls an incident at a punk show at the Stardust Ballroom. “I remember seeing a guy with long hair push his way on to the floor in proximity to where guys were slamming. All of a sudden several people began surrounding him from behind and pointing to him, and the next thing I remember is him being literally torn apart. He was really badly beaten and was taken out by paramedics 10 minutes later.”

Thrashead, a writer and devout punk fan for more than 25 years, puts it succinctly. “The thing with the whole metalhead-punk thing was, it just came down to your typical high-school ignorance, where it was just like, you’re not like me, you’re not part of my crowd, I’m going to kick your head in. It’s that cheesy, homo-erotic alpha male shit.”

The advent of hardcore brought division within the punk ranks, remembers Lorraine Ali, a past contributor to Rolling Stone and the Los Angeles Times, and now a senior reporter for Newsweek. “The old-school punks hated us. It was all like, we didn’t know what we were doing, and it wasn’t good punk rock because it was just too fast.”

While others called Circle Jerks hardcore, Morris was less inclined to attach a label. “One of the things with us is we never really classified ourselves. We leave that to the critics. They needed to come up with names to place on everybody and that’s what they came up with.”

Encountering the ramped-up aggression of this new music caused problems at Black Flag gigs, explains Rollins. “The hostility I encountered was with skinhead types and idiot locals who just decided they wanted to fight.”

As hardcore was taking off in the suburbs, Hollywood was becoming the focal point of a metal revival that had more to do with big hair than long hair, led by Mötley Crüe. Unlike the testosterone-fuelled hardcore audiences, Mötley’s followers included plenty of women and posed no threat, according to Mullen. “When Mötley blew up, it’s like the punk rockers didn’t give a shit because it was like another world anyway.”

While “the poodle metal scene”, as Mullen refers to it, was happening in Hollywood, a very different metal movement was emerging a few miles down the coast in Orange County where Metallica and Slayer, along with Houston’s DRI, were pioneering what became tagged thrash or speed metal. For audiences, they posed a conundrum. “I remember at first when Metallica played the Troubadour some people mistook them for a punk band because they didn’t get it, because this was a whole new thing, a speed thrash metal,” recalls Mullen. “It confused the hell out of people in LA because it was like, ‘Wait a minute, they sound punk but they’ve got really long hair.’”

While King cites Judas Priest, Venom and Motörhead as primary influences, he also credits the impact of the New Wave Of British Heavy Metal. “The first Judas Priest show I ever went to, Iron Maiden opened for them. Even though today I’m a bigger Priest fan, that day Maiden kicked them in the teeth.”

Jane’s Addiction is another group that combined elements from various sources, including punk and metal, and could lay claim to uniting the various fans, except that Mullen thinks frontman Perry Farrell’s eccentricities might have been a bit much for some. “Perry was even a freakier-looking rock star than Axl Rose. He was considered a freak by the metal audiences.”

Later, in Seattle, grunge brought together the essential elements of punk – its attitude and soiled look – and melded it with metal’s aural assault. Its audience was people with hair of every length, style and colour. And although many agree that grunge was the closest thing to unity, there are still arguments over which act best focused that accord. Ali suggests, “I think the true success of those mergers was probably Nirvana.” Inevitably in what is such a contentious topic, Mullen disagrees. “I’d say Soundgarden, Mudhoney, Mother Love Bone.”

This feature originally appeared in Issue 80 of Classic Rock Magazine.