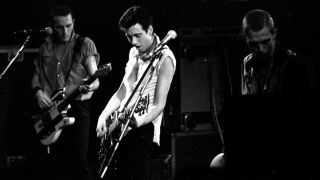 You all know ye olde legend of punk. It runs that, in the mid-70s, rock music was tired and self-indulgent and out of touch with its audience, more concerned with filling stadiums and hoovering up heeps of drugs than doing it for the kids. With their capes and drum solos, their endless guitar wankathons and King Arthurs-on-Ice, the dinosaurs of rock didn’t stand a chance when faced with punk’s short, sharp shock tactics. Instead, faced with Johnny Rotten and his green haired army, the old guard clutched their hearts, held a scented hankerchief to their noses – ‘Oh my giddy aunt!’ – and ran for cover. And, lo!, rock was fun again.

…Except… It never really happened like that, did it?

For starters, the albums of 1975 and ’76 were pretty damn good, thank you very much. Secondly, the dinosaurs of rock that punk supposedly slayed are stronger than ever. (Pink Floyd, Yes, The Who, Led Zeppelin, Genesis, Deep Purple – all are perennial best-sellers, many of them still huge live draws.) Thirdly, the punk bands themselves have become ‘classic rock’: the Sex Pistols reunited, The Clash have been canonised, the Buzzcocks are still active, and bands like Stiff Little Fingers tour continually. Punk bands are lauded in magazines, entered into the Rock’n’roll Hall Of Fame, endlessly reissued and repackaged, and an influence on a new breed of rock bands, from Motörhead to Guns N’ Roses and beyond.

How the Wreckless Eric did that happen?

“I think the over-emphasis on that late 70s movement trivialises a bigger idea,” says Don, talking a mile-a-minute like a Ramones- song-made-flesh. “And the bigger idea is actually an ongoing thing. This wasn’t this weird thing that just happened back then. It’s actually very dangerous to think of it like that – cos if you don’t realise that it’s ongoing, then it might not happen again. And when you look around today, from my point of view, it sure fucking needs to.”

Suicide’s Martin Rev agrees: “If you look a little back,” he says, “you see that 50s rock’n’roll is really punk.”

“There was your mum’s music,” says Henry Rollins, “and then there was Elvis Presley.” The parallels are obvious: Elvis, Jerry Lee Lewis, Chuck Berry and the other original rockers were genuinely shocking at the time (seen as a lewd, corrupting influence), musically naive, and flying in the face of the musical establishment of the day. Their music gave a whole generation of teenagers their own scene – their own music that set them apart from their parents – and it’s a cycle that’s been repeated ever since.

“That was just as punk rock as anything,” agrees Sex Pistol Steve Jones. “When everyone was against Vietnam and they were all doing their own thing, having parties, taking LSD at Woodstock and all that…”

Hang on – what about ‘I Hate Pink Floyd’ and ‘Never Trust A Hippy’? “Back in the mid to late 70s, I was there like all the rest of them saying ‘fuck the hippies, boring old farts’ and all the rest of it,” admits Don Letts. “But you have to be honest about this stuff and realise that when the hippy thing happened it was as punk rock as anything else. At the moment of its inception – what it became 10 years later was something totally different. It started off with, what – a student putting a flower down the barrel of a soldier’s gun? – and ends up being Cheech and Chong.

“But if you’re honest about punk rock, it became ridiculous in a much shorter time. After just 18 months it became about bin liners, safety pins and mohawks. They painted themselves into a corner – ‘punk rock’s about this and that’ – and it wasn’t about that. It was about freedom.”

In his book, It’s Not How Good You Are…, a creative guide for people in advertising, former Saatchi and Saatchi executive Paul Arden imagines a world where creative types could produce whatever they liked with no restrictions. “What would we do?” he asks. “We would react against it, saying, ‘How can we be dull? Let’s do it badly, let’s make it ugly, and let’s make it really cheaply.’ That’s the nature of the creative person. All creative people need something to rebel against…”

“We were punk,” Jon Anderson, singer with prog giants Yes, told Classic Rock. “James Cagney was a punk. Punk music was a collection of ideas. When Yes were first going we used to break our guitars onstage. And then punk rock came along and saw how to make more money… The way to make it more important was to attack the established bands.”

“It could be argued that when the progressive rock thing first kicked off that it had a punk rock attitude because it was going in the face of the traditional three minute song,” says Don Letts. “The thing with counter- cultures is that they all become part of popular culture so I’m sure those guys fit. But in time honoured tradition, they all become castrated and part of popular culture until the next thing comes along.”

This revolutionary process has become second nature to rock music. New York Doll David Johnasson, remembers his band’s simple ambitions: “Rock’n’roll had become this be-denimed, drum solo kind of thing and what we wanted to do was bring it down to three minutes and put that Little Richard drag on top of it – and that’s what rock’n’roll was to us. We were just trying to make rock’n’roll.”

“Motörhead were instantly accepted by the punk crowd and we liked the punk bands,” Lemmy told Classic Rock. “It was like rock’n’roll starting up all over again, it was great. But then you could say the same things for grunge and the New Wave Of British Heavy Metal – they were like starting all over again. A new movement like that is great, whatever the trappings.”

Not everyone thinks so: people still write into Classic Rock to complain about our punk coverage. While it’s commonly accepted by everyone from Lemmy to Axl that punk created some of the most startling and vital rock music of the last 40 years, its over-exposure at the expense of other musical movements and its adoption by London trendies as The Last Great Scene, means that many rock fans whose memories stretch beyond 1977 view it with scepticism. “Whether you like the music or not is almost irrelevant,” says Letts, “but you’ve got to dig the tactics. You’ve gotta dig the effect. Music’s like a foreign language – you might not understand it, but everybody’s got to talk. There’s stuff I don’t particularly like the sound of but I can dig the vibe.”

Is it weird for him to see punk rock in Classic Rock magazine? “I don’t see a problem with that at all, funnily enough. I mean, Hendrix: when he got up and did all that shit, Star Spangled Banner at Woodstock – that’s punk rock to me. And he’s wearing all that military gear, reappropriating things – works for me as punk rock.

On the subject of black and white, punk is often given extra kudos for being a melting pot or culture-clash between black and white music – The Clash and The Ruts playing reggae, PiL adopting dub techniques etc.

“Well, people say that,” says Letts, “but what did Jagger and Richards listen to? What did Lennon and McCartney listen to? What did Page and Plant listen to? Black music. The difference with punk is this: no longer were the punks listening to music from thousands of miles away in the Mississippi delta, they were getting it almost intravenously because we were living next door to these people – it was coming from the West Indies. With The Clash, I could hear the effect of my culture on their music – you could hear the bassline right up front, you could hear Joe singing about Prince Far I and Dr Alimantado and, I’ve gotta say, as a first generation black British youth that was kind of inspiring to me. It was understanding our differences that made us closer, not by trying to be the same.”

Maybe what was most interesting about the punk rock explosion was that it really was a white riot – a bunch of white rockers trying to do their own thing: the Ramones trying to take the blues out of their music, bands eradicating groove and funk. “Absolutely, absolutely,” says Letts. “This might sound racist but it’s not – I’m glad that there’s some white guys holding down the white man’s corner. And I’m glad there’s some black guys holding down the black man’s corner. I mean, I love Led Zeppelin. But then again, you get into the machinations of it and you realise that there is some black stuff in there, it’s just lost in interpretation.”

Zep did borrow from the blues – stole, really – and got sued for it.

“Well, I don’t do ‘steal’,” says Don. “What music comes out of a fucking void? Music by its very nature – someone hears someone else and you’re inspired. It’s like when people used to say that Paul Simon had stolen African music – it was like, well if you want African music, it’s actually still there if you can be bothered to fucking go!”

This article was originally featured in Classic Rock magazine.

The 10 most underrated UK punk albums of all time