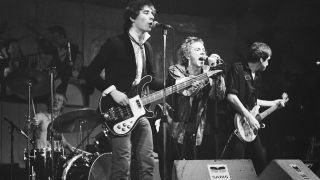 As a crop-haired angry young man myself, I can’t recall ever wasting a minute of 1976, ’77 or ’78 thinking about how much I hated prog. Like most of my contemporaries I was having too much of a good time to really give a toss about prog, disco, rockabilly, pub rock or chart pop one way or another. There were too many other things in the world to hate. If there was anything musically that I couldn’t stand it was the constant diet of crap novelty records and golden oldies and smug DJs that ruled Radio One and Top Of The Pops in those days.

The reality, of course, was that while prog certainly had its share of former public schoolboys, at least the prog rockers were honest about their origins while people like the privately educated Clash guitarist Joe Strummer felt that it was important to fake a prolier-than-thou past for themselves. At my comprehensive school, as well as a small smattering of punks, the popular artists of the day in 1976 were Frank Zappa, Mahavishnu Orchestra and – for some reason – The Incredible String Band. Conversely, the boys from the nearby fee-paying school were always trying to convince you that they were ‘too street’ to listen to anything more complicated than The Ramones, and that their spare time was spent sniffing glue, getting nicked by the pigs (maaaan) and smashing the state.

In the last years of the 70s, prog continued to outsell punk both on album and live. The decade culminated with one of the most massive prog albums ever: Pink Floyd’s The Wall.

In the late 70s and early 80s new bands like UK, IQ, Pendragon, Twelfth Night, Marillion, After The Fire and Pallas all formed, while a realignment of prog’s superpowers created bands like Asia. It says much about the hubris of the media that, having failed to notice these bands, there was a sort of collective assumption that they didn’t exist. But with practically no press, radio or TV coverage anywhere, these bands regularly sold out shows and shifted millions of albums.

Today, prog is almost all-pervasive. There are so many bands – from the Dream Theater prog metal school to the experimental post-indie rock of Radiohead, to leftfield superstars Tool – who can all be termed prog, and who are indeed comfortable with the tag. Pink Floyd’s Live 8 reunion not only stole the show but saw their album sales go through the roof afterwards, while the influence of King Crimson, Floyd and Yes is everywhere – King Crimson themselves still make seriously cutting-edge music, and Yes main-players Anderson, Rabin and Wakeman recently coming together to make music with one another again. Not bad for something that supposedly ‘came to a halt’ 30 years ago.

This article was originally published in Classic Rock issue 97.

The 100 Greatest Prog Anthems Of All Time