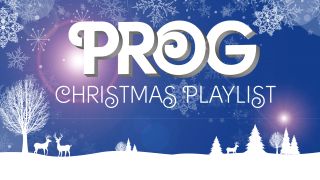 So Christmas is but seven days away. Some of us are already off work, getting ready to settle down for the seasonal period. Others working at clearing their desks and looking forward to putting their feet up in front of telly, or meeting up with family.

Remember, this isn't a definitive list. Nor is it the best prog Christmas songs ever. So yes, maybe your personal favourite isn't on the list. It's a list of Christmas songs we're enjoying at the moment, and hope that you do too.

Have a great Christmas everyone...

Released in 2017, and featuring prog fan [AND Prog mag reader] and actor Mark Benton in the heartwarming video, this is current prog faves Big Big Train's entry into the Christmas canon. Replete with brass band, children's choir and the band singing inside a snow globe, what's not to like?

Marillion - The Carol of The Bells

Released in 2013 when the band put out their A Collection Of Recycled Gifts Christmas album, this is a proggy take on the old Ukrainian folk chant of Shchedryk. It also rapidly became one of our fave prog Xmas tunes ever! Love Steve Rothery's referencing guitar solo and the band prancing around inn a  field in fancy dress too!

Kaprekar's Constant - All You Wish Yourself

One of this year;'s entries into the Prog Christmas collection is this beautiful song from Kaprekar's Constant. "Hopefully the song’s uplifting message will be welcomed by the many election and Brexit-weary," says bassist and co-writer Nick Jefferson. With the addition of former Van der Graaf Generator sax player David Jackson, what's not to like?

Rick Wakeman - In The Bleak Midwinter

To be honest, we were hoping to feature the new version by Rick's son Oliver and Rodney Matthews, but it's not on YouTube!! So here's Rick  Wakeman and a new rendition of the beautifully mournful seasonal favourite, from his recent Christmas Portraits album. Lovely stuff...

A song, according to the mighty Fist, that "was penned in the style of a Victorian poem, reflecting of the dark and spectral side of the festive season, and recalls the days when rock giants such as Greg Lake or Jethro Tull would break from tradition to provide something to cater for a different musical pallet during the festive season."

Arguably one of the very best proggy Xmas offerings. Recorded by the Yes rhythm section and with lyrics from former King Crimson man Pete Sinfield, after a proposed new band XYZ with Led Zeppelin guitarist Jimmy Page fell through. Following Run With The Fox, Squire and White formed Cinema with Trevor Rabin and Tony Kaye. And we all know what happened next!

Dip in anywhere in the Jethro Tull catalogue and you're likely to find fine seasonal fare, such is the band's kinship with the Winter season. Instead of one of the usual offerings, we've opted for this - originally written for Dave Pegg's 1983 solo album The Cocktail Cowboy Goes It Alone. Tull recorded it during the Broadsword And The Beast sessions. It ended up appearing on the b-side to Tull's one-off 1986 single Coronach, a song written for the Channel 4 TV series The Blood Of The British, itself a great song.

An interesting one from the Yes and Asia keyboard player. This recently surfaced on the A Prog Rock Christmas Album which was released last month. Although it had originally been recorded for A Kid's Retro Christmas Soundtrack album that saw the light of day several years earlier. Anyway, what's Christmas without a bit of Charlie Brown?

True, we'd normally opt for Mike Oldfield's 1974 original, but this version, from Oldfield's old musical collaborator Les Penning and Magenta mainman and Oldfield acolyte Robert Reed, released in 2018, gets the nod this year. With it's delightful video, described as "heartwarming and utterly enthralling" by Oldfield producer Tom Newman, it raised money for the homeless charity Crisis too.

Normally the Trans-Siberian Orchestra version of the instrumental medley of God Rest Ye Merry Gentlemen and Shchedryk that appears in these playlists. Instead we've gone for the 1995 original from Savatge, who included this on their Dead Winter Dead album and found themsleves with an unlikely hit on their hands. It was inspired by the story of local msuicans in Boznia & Herzogovina playing Giazatto's Adagio In G minor in the bombed ruins each day to honour those killed during the bombing.

What else? We might have shied away from some of the expected offerings, but Greg Lake's timeless dig at the commercialisation of Christmas time, with lyrics again from Pete Sinfield ( and a dash of Prokofiev), just had to be here. A n umber two hit for the late Lake in 1975, and kept from the top spot by Queen's Bohemian Rhapsody.  "I got beaten by one of the greatest records ever made. I would’ve been pissed off if I’d been beaten by Cliff Richard," Lake once quipped.