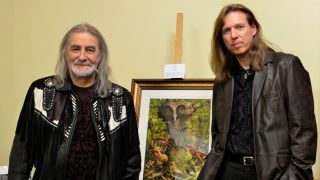 Oliver Wakeman and Rodney Matthews are to combine forces again for a new Christmas single. The pair have recorded a new version of In The Bleak Midwinter which will be released on November 29.

The new version features Wakeman on keyboards and piano and Matthews on drums, with David Mark Pearce on guitars, Steve Amadeo on bass, Pete Coleman on recorder and vocals from Miv Cameron and Charlotte Dickerson.

The single features brand new artwork from Matthews, inspired by the lyrics to the famous carol, written by the English poet Christina Rossetti. The artwork in turn inspired Wakeman to create a new arrangement of the Gustav Holst music with a whole new section written and arranged into it.

In The Bleak Midwinter will be available as a CD featuring both a Carol and Radio Edit from Matthews' website.