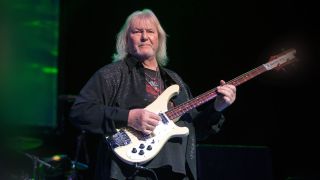 Jimmy Page hopes to release the recordings he made with late Yes bassist Chris Squire in 1981, he’s revealed.

They formed XYZ with Yes drummer Alan White, naming the project by abbreviating “Ex-Yes and Zeppelin” because all three were no longer with the bands that had made their names.

Work was abandoned after they failed to secure a suitable singer, although demo material has circulated and some of the music later appeared on the reformed Yes’ 1983 album 90125.

Asked about releasing the recordings, Page tells Radio.com: “Absolutely, but I haven’t worked on it. It’s something I wanted to do after all the Led Zeppelin stuff was out.

“I wanted to contact Chris and Alan. The music was really good – it’s the first thing I did after we lost John Bonham.

“I had a studio at the time and they wanted to get together. I thought it was like laying down the gauntlet: ‘I’m not curling up under a rock and hiding.’

“These guys are really, really good, so I had to be really good too. It was really an interesting blend – really good music.”

He says of Squire’s death: “That was really sad. He was a phenomenal bass player. It’s really sad that we’ve lost him.

Page’s Led Zep remaster series is completed with the launch of Presence, In Through The Out Door and Coda tomorrow (July 31). White last week told how Squire had asked him to keep Yes moving forward before his death.