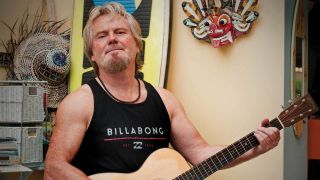 Purton, a village just outside of Swindon. I’ve lived here for 12 years.

My sister Del walking in through the door with this LP with a black cover, a refracted prism on it and absolutely no writing. I played it and it absolutely blew my mind…

Camel’s Moonmadness, in 1976. I remember it so clearly – we were on holiday in Ilfracombe in Devon, I found this backstreet record shop, went in there and there it was.

Barclay James Harvest at Colston Hall in Bristol. It was during their Octoberon tour in ’76.

I’m a bit of a Luddite. I’m the only person I know who only uses their mobile phone to make phone calls. I do have an iPad and that’s useful, I’ve got Garageband on there.

My dad used to play Charles Aznavour in the car, and he really got me into it. I really, really rate him – his lyrics are so incredibly profound, and Yesterday When I Was Young is an absolute classic.

After The Masquerade Overture came out in ’96, financially I did quite well, and bought a house in Ascot with a swimming pool and stables, a proper rock star pad. We had a lot of parties with naked girls, tequila, the whole nine yards. I had to flog it though – I got divorced and had to pay the ex…

I saw Mike Oldfield at the Royal Albert Hall on the Tubular Bells II tour and the sound was incredible. If you get the wrong seat though, the sound’s terrible. I like playing 229 The Venue, and really enjoyed The Peel.

My main passion apart from music is surfing. I’ve just come back from Sri Lanka where I surfed all the time. Also, motorbikes, wild swimming, camping, mountain biking. I’m usually either in the sea or in the Forest Of Dean.

A lot of people talk about these other, grumpy geniuses, but Phil Collins is cheerful and bloody good – a drummer, singer, writer, producer, frontman. He’s been much berated but he is a genius.

I don’t like having a lot of stuff, it robs you of your freedom. But I do have seven surfboards, including a rare Spider Murphy board.

Lately I’ve bought Velvet Underground & Nico, which I’d never heard, Pat Metheney’s We Live Here, and Tamer Animals by Other Lives. They’re all different, and all have a prog bent.

Camel at Ramblin’ Man in 2015. It was amazing. Andy Latimer is one of my guitar heroes.

My current girlfriend was originally a Pendragon fan. I autographed her jeans at the Marquee in 1987. Later she got to know Clive, I got off with her at his house, and can’t shake her off. In a good way!

Definitely, definitely Mick Pointer. We’re good friends, we meet up quite often and we’re really offensive to each other. It’s always loads of fun.

There can be only one – Supper’s Ready. I know it’s a cliché, but when I heard that I thought it was just incredible, and it still is.

I’d love to get Steven Wilson to mix one of our albums. I think that’s where his true strength really lies. He gets a lot of personality out of the music he mixes. It would be interesting.

A prog album to get you in a good mood?

Breathless by Camel is so upbeat. Down On The Farm’s such a cheery song. But on the whole I quite like melancholic music.

Genesis on the Wind And Wuthering tour at the Hippodrome in Bristol. They played Supper’s Ready, Squonk, One For The Vine. The show was so, so, so good. It’s imprinted on my brain.

The Biggest Secret by David Icke. It’s as out there as you can possibly get. People call him a basket case, but after Brexit it seems a lot of what he wrote 20 years ago is coming true. Who’d have thought it – vindicated at last!

Trick Of The Tail. The LP’s textured cover, the yellow and brown colours, the illustrations. It’s just perfect.

We’re finishing the audio mix for the Masquerade 20 DVD we recorded in Poland last May, it sounds absolutely amazing, it’s out in February. Also I’m writing a book on the band’s history, and I’m writing for the next album. I’m taking my time with it, I want it to be really good.