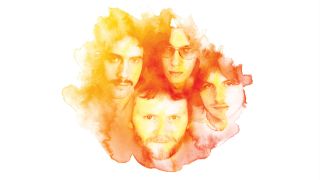 From terminally uncool teenage Yes fans to battered survivors of the 1980s prog wars, Pendragon have done things the hard way in search of their own personal Holy Grail. But now, 30 years on, they’re finally having the last laugh on the world.

There’s a weird logic to his thinking. Pendragon are one of prog’s great unsung survivors. Since they rose to cult prominence in the early 80s, Barrett has steered the band through the choppy waters of changing musical trends and the implosion of the music industry.

In the late 80s, while bands were still hypnotised by the million-dollar promise of a major record deal, Pendragon had already founded their own successful label. They were there in the vanguard of artists who recognised the importance of the internet in sustaining a band’s career, from fan recruitment to crowd-sourcing to actually selling albums. And while many of their contemporaries from the neo-prog scene and beyond were long ago forced to hit the job centre, metaphorically or otherwise, these unlikely elder statesmen have rebuilt their career around modest but reliable five-figure album sales and mid-sized tours, without the slightest whisper of an A&R man saying: “But I don’t hear a single.”

Today, as we sip beer in a South London bar, the material rewards of being a pioneer are evident. Barrett’s shiny Harley-Davidson sits outside, gleaming in the sunlight. If that’s what not giving a fuck gets you, we’ll have what he’s having.

There’s no irony to the fact that Pendragon were founded during the height of punk. While they’re a world away musically from the filth and the fury of Johnny Rotten and the rest, they share an unswerving dedication to doing things the way they want them done.

Barrett himself grew up in the sleepy Cotswolds town of Stroud. A fan of such first-wave prog icons as Genesis and Camel, he formed Zeus Pendragon in 1978, while still at school. Even then the cultural battle lines had already been drawn.

“One mate of mine was obsessively into Yes,” the vocalist and guitarist recalls. “Then virtually overnight he said he was going to burn his Yes records because he’d got into the Sex Pistols. I couldn’t get my head around that. Even though I liked the punk attitude and a lot of the music, I really didn’t like people deserting the bands they’d liked for years.”

There were arguments and even physical fights between Barrett and his schoolmates. But the misfits would eventually have their revenge. Ditching the ‘Zeus’ from their name, Pendragon slowly built a name for themselves in local circles, buoyed by an underground network of like-minded bands that included Pallas, IQ, Solstice, Twelfth Night and Marillion, the latter the undisputed leaders of the movement that would soon be dubbed ‘neo-prog’.

In 1982 Marillion invited Barrett and his band to support them at the Marquee, the fabled London club that was fast becoming the spiritual home of this burgeoning scene. “That was the place everyone wanted to play,” says Barrett. “It was always full and the audience reaction was amazing. It was great for making contacts, too.”

Marillion soon graduated from the Marquee scene, signing to EMI and notching up a string of Top 40 singles and albums. In their wake, labels keen to get their own slice of the neo-prog action began to cherry-pick their contemporaries.

Yet for Pendragon the record deal never quite happened. Instead it was left to their manager John Arnison (who also handled Marillion) to set up his own label, Elusive, through which they put out their first EP, 1984’s Fly High Fall Far, and the following year’s debut album, The Jewel.

It was a tough slog. “We were skint as bastards,” says Barrett. “We could barely keep the van on the road, and we couldn’t afford anywhere to stay. We slept on the floors of people we didn’t even know. Our manager once put on U2 in Stroud and they slept on his floor. We figured if it’s good enough for U2, it’s good enough for us.”

If it sounds romantic with hindsight, it wasn’t at the time. The low point came in 1986 when EMI rejected an album’s worth of demos the label themselves had funded. It coincided with the bottom falling out of prog for the second time.

“I just thought nothing could get any worse,” says Barrett. “We’d just lost our management, attendances at the Marquee were starting to dip, I was doing a bread round that started at three in the morning. To add to that, the press hated us.”

Barrett recalls sitting in a greasy-spoon café with keyboard player Clive Nolan, “banging the table in frustration” after reading yet another bad review. The pair had already discussed jacking in the band, but now, in true punk fashion, they instead turned their anger into an energy. “We decided to continue,” Barrett says with a grin. “Just to spite them.”

It was the DIY spirit they had been forced to adopt that kept them afloat. In 1987, Barrett negotiated ownership of the EMI demos, and released them the following year as Kowtow via Pendragon’s own newly created label, Toff. Their third album, The World, followed in 1991. The sound of a band sticking to their guns in the face of fashion and logic, it was like 1978 all over again.

Prog, neo or otherwise, might have been as dead as a dodo at home in the UK, but Pendragon found unexpected career avenues opening up in the most unlikely places. In the early 90s, Barrett received a call from his booking agent, who told him that a Pendragon fan in Poland was keen to put on a show by the band.

“It turns out that since the communist era, a guy called Piotr Kaslowski had been smuggling records into the country under lorries and playing them on [pirate radio station] Warsaw 3,” he says. “So we go over, and the first gig we do there’s over a thousand people. It was unbelievable, almost like a religious experience. I’ve never seen such joy on people’s faces. Kids just got on the stage, the security guards got completely overrun, and we played the whole set again because they wouldn’t let us leave.”

After years of struggle, it was a huge confidence boost – and a financial one. By 1996 Pendragon had hit a new commercial and creative peak with their fifth album, The Masquerade Overture, which married complex, emotive song cycles with big pop-rock hooks. It sold 60,000 copies – impressive for a band with no major label backing – and for Barrett, it seemed like the good times had arrived.

“I was able to buy quite a nice house in Ascot,” he recalls. “I remember looking out of the window, thinking: ‘All the years of struggling, it’s finally paid off.’ Then within a couple of months I got divorced. I lost the house, lost my marriage and I was in bits. It was the biggest fuck‑up I’ve ever had in my life.”

This personal turbulence led to a long bout of writer’s block, which put the brakes on the band’s momentum. But by the turn of the millennium the creative dam finally burst, resulting in 2001’s Not Of This World. An emotional outpouring that connected in a way that prog rarely does, it made for one of the genre’s great heartbreak albums.

Unwilling for Pendragon to be seen as a relic of a bygone age, Barrett began to introduce eclectic influences, from nu metal to hip-hop, into subsequent albums, though 2015’s Men Who Climb Mountains was a return to the more expansive, epically inclined sound of their pivotal 90s period.

Right now Pendragon are playing The Masquerade Overture in full to mark that album’s 20th anniversary. And with prog more popular than it has been since the 1970s they have at last found themselves in step with the rest of the world. Or perhaps it’s the other way round. Barrett doesn’t give a fuck what you think either way.

“We’ve probably lost a few fans but gained many more,” he says. “People still want to hear this music, and they probably care as little as I do whether it’s cool or not.”