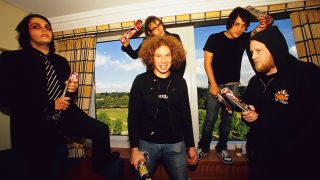 Popular music was primed for change. With Three Cheers For Sweet Revenge, My Chemical Romance delivered it.

The hushed opening of Helena was an intriguing preamble that marked MCR out as a group of musicians prepared to experiment and take the scenic route toward pure rock fury. Its subdued scene-setting soon gave way to a deeply personal and heartfelt love letter to Gerard Way’s deceased grandmother. Despite its heavy lyrical content, it still kicked serious amounts of arse, the thrashing verses and breakdown groove of the chorus sating those who just wanted to bang their heads.

Give ’Em Hell, Kid and To The End follow in a much more straightforward punk-rock vein, all urgency and blazing power chords, yet are characterised by Gerard’s bitter and wounded prose. You Know What They Do To Guys Like Us In Prison tries to restrain itself and allows Gerard to wallow in his own fears, but, like Animal in The Muppets going crazy on his drums, MCR can’t keep the subdued gothic shoegazing up for long. Just as the chorus is about to kick in, the band detonate in exhilarating fashion.

Then there comes the song with which My Chemical Romance captured the hearts of so many. When MCR released I’m Not Okay (I Promise), they immediately entered into the lexicon of great anthems for the disaffected youth. It stands alongside the likes of The Who’s My Generation, The Sex Pistols’ Anarchy In The UK, Nirvana’s Smells Like Teen Spirit and Rage Against The Machine’s Killing In The Name in the honours list of zeitgeist-capturing, generation-defining statements.

It’s also a song that best showcases what made My Chemical Romance so exhilarating musically. Despite its outsider stance, the song is effortlessly cool, the mid-section breakdown where Gerard declares ‘I’m okay’ over a tinkling piano before the whole band come careering back in with renewed vigour that they keep until the song’s end is delivered with a swagger that any band would sell body parts to replicate.

I’m Not Okay became the most perfect three-and-a-half minutes of teen angst in a decade and, in doing so, launched MCR. It made them more than a band – they became a badge of honour. It's still a genuine anthem for the disaffected, sounding as righteously pissed off and fresh as it did 15 years ago. For all their future success, it’s this moment that turned My Chemical Romance from a band to a cult and is arguably the four minutes that have come to define them.

If people thought the album was to peak there, then The Ghost Of You, while not being as startling and instant, still kept the anthems coming. A black-hearted ballad of true woe and despair, it marks the point where the more grandiose tendencies of the band were first allowed to flex their muscles.

On reflection, all these years later, there is no denying that the second half of the album isn’t quite as breathless as the first. Only the spaghetti western-inspired Hang ’Em High, featuring a typically frantic vocal performance from former Black Flag and Circle Jerks frontman Keith Morris, and the brilliantly defiant Thank You For The Venom, really live up to what had gone before.

By that point, though, it was enough. My Chemical Romance had spliced an original, inspiring and youthful collection of dark-sounding punk-rock anthems that showed as many glimpses of instantaneous pop as it did the wildly lavish pomp and ceremony that would come to characterise the oncoming juggernaut that was The Black Parade. And although that may be the album most identify them with, Three Cheers For Sweet Revenge still stands as My Chemical Romance’s masterpiece – and one of the finest alternative albums this decade has seen.