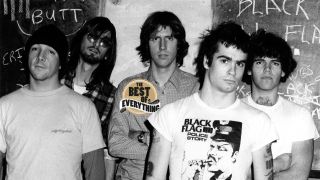 Ask actor, author, pundit and occasional rock-god Henry Rollins about Black Flag and he’ll humbly deflect that he was merely the fourth of their vocalists, and point you to the work of his (eminently worthy) predecessors Keith Morris, Ron Reyes and Dez Cadena.

But Rollins wasn’t only the Californian hardcore punk pioneers’ longest-serving frontman; he led the group through their greatest triumphs, their most high-profile era, and even, by the end, wrested a little control over the group from their infamously irascible founding guitarist Greg Ginn – an act that was rewarded by Ginn’s pulling the plug on the group in 1986.

During his five-year tenure with Flag, Rollins bulked up and decorated his freshly pumped muscles with copious tattoos, learning to hold his own with Flag’s brutal, violent followers as they did battle in the moshpit. But Rollins was no mere slab of meat; he explored his burgeoning interest in poetry and spoken word on his half of Flag’s 1984 LP Family Man, which balanced a side of seething, scarifying Rollins spiel with a side of equally seething Black Flag instrumentals, while the infamy of fronting the premier American punk-rock group of their era saw Rollins become something of an intellectual pin-up for America’s underground rock press. Wisely, Henry’s resisted indulging in any of Greg Ginn’s ill-advised Black Flag reunions of recent years, though when he and his Rollins Band took the Flag catalogue on the road in aid of the West Memphis Three early last decade, the vein-bulging bellow-machine proved that he’d long since made every one of these songs his own.

RISE ABOVE (Damaged, 1981)
After numerous false starts, Black Flag finally cut their debut album Damaged once Rollins had assumed the microphone, bawling bellicosely through the set of songs, many of which had already been recorded by his predecessors. But it was the sheer force of Rollins’ delivery that made it clear he was the perfect man for the job, Flag’s classic line-up laying down a skyscraper-flattening racket behind him as he battled Ginn’s haywire lead guitar for earspace. And even though he didn’t pen the lyrics to debut album Damaged’s opener, its fuck-you, can-do message was an early incarnation of the punk-rock positivity gospel Rollins would be preaching through the ‘90s.

POLICE STORY (Damaged, 1981)
Kicking off like a napalm-fuelled nail-bomb, this anti-cop anthem opens with a riff on the warpath and Rollins barking phlegmatically, “This fucking city is run by pigs / They take the rights away from all the kids.” And Black Flag knew the villainy of the LAPD better than most, their gigs having become flashpoints for conflict between their hellion punk-kid following and the fascistic local cop force, while Flag’s rehearsal spot/crash-pad The Church was under constant police surveillance. Inverting the dumb “They got the guns but we got the numbers” hubris of fellow LA outlaws The Doors’ Five To One, Police Story ended on a downbeat but realistic “They hate us / We hate them / We can’t win, no way”, though Rollins was sure to bark “Motherfuckers gonna pay” a few times in the background to prove Flag weren’t going down easy.

DEPRESSION (Damaged, 1981)
Side Two of Damaged was when the going got heavy, and Depression opened it with a wall of blackened guitar skronk from Ginn, before a devil-on-my-heels riff reared up and Rollins began barking about the black dog. “Depression’s got a hold of me,” he yelled, “Depression’s gonna kill me!”, before the riff twisted like a Cadillac slammed into a brick wall. Rollins was the fourth Black Flag vocalist to attempt Depression, and the only one to bring its black-hearted hell-visions to screaming life. Henry had already proved up to delivering Flag’s righteous anthems, but here he also proved man enough to evoke its dark, miserable heart.

DAMAGED I (Damaged, 1981)
“My name is Henry, you’re here with me now,” opened the final track off Damaged, and it felt a lot more like a threat than a welcome. Over the next three minutes 50 seconds, Flag hobbled through a misshapen, off-centre wreck of a tune, limping like a wounded animal, over which Rollins played out an eerie, unsettling psychodrama, playing both sides of its dialogue – victim and bully, lickspittle and oppressor – like some ugly S&M game. For the skin-crawling performance, Rollins tapped into his childhood home-life, and his dysfunctional relationship with his own absent disciplinarian father. “It’s nice, in my mind,” Rollins growls in the final verse, that falling-apart groove now fallen well and truly apart; “No one comes in. STAY OUT!” Given the vehemence with which Rollins delivered this command, few would refuse him.

MY WAR (My War, 1984)
It took Black Flag three years to follow up Damaged, time they spent in a draining legal battle with SST Records’ erstwhile distributors Universal, during which time they were forbidden from releasing any material (a compilation of previously recorded Flag out-takes, Everything Went Black, slipped out during this period, to keep the band afloat, an effort that earned Ginn and bassist Chuck Dukowski a night in chokey). Their second album opened with its title track, a roiling, paranoid thrash penned by Dukowski, with Rollins accusing all around him – even his friends – of being “one of them”, over a circular riff that led to several ultra-heavy breakdowns, wherein Rollins tapped into his inner anguish and bayed like a wolf. Dukowski’s paranoia was well-founded, as it turned out; by the time Flag recorded his signature song, Ginn had swindled Chuck out of the band he loved and put him in an administerial role running SST Records, playing all the bass-lines on the album himself under the credit ‘Dale Nixon’.

NOTHING LEFT INSIDE (My War, 1984)
As an album, My War was conceived in part as a ‘Fuck you’ to the violent punk brats who peopled every Black Flag moshpit, just looking to slamdance and break heads and fuck with Henry every chance they got. The album’s second side contained just three songs, each sounding like Black Sabbath stoned on mogadons and playing at 16rpm, and Flag took great pleasure in playing all three tracks together in concert, unleashing a colossal bummer on the kids in the audience wanting to punch each other to thrash-punk riffs. Nothing Left Inside was the finest of the three, the riff ever on the edge of falling apart, Rollins lowing and howling like a dying animal, as Flag plumbed a new depth of heaviosity within the punk-rock battlefield.

SLIP IT IN (Slip It In, 1984)
The title track to Black Flag’s fourth album is, without question, the ugliest entry in their discography, thanks to a lyric that clumsily hews close to suggesting that women say no to sex when actually they want it, and whose actual intended message still sounds an unwelcome chauvinist note. But those uncomfortable lyrics are allied to a fearsome riff and some of the greatest work Rollins and Ginn ever contributed, the former locating a hitherto-absent carnality as he duels love grunts with a guesting Suzi Gardner (later guitarist with L7) and struts like a farmyard cock, the latter firing glorious lead guitar scree over the laser-guided chug, and flaunting the kind of chops you’d develop if, like Black Flag, you toured with Dio tapes playing on the van stereo. As Ginn told young zine writer Mark Arm (later of Mudhoney) in 1983, “‘Dio’ is Latin for ‘God’.”

RAT’S EYES (Slip It In, 1984)
As Rollins grew more confident in his role as Flag frontmen he began to pen his own lyrics, tapping into a gift for bleak Bukowskian self-loathing, best evidenced on this nightmarish grind from 1984’s Slip It In. Over a stop-start funereal sludge, Rollins tells it like it is from the gutter, “sing[ing] rat’s blues” with a wheeze akin to the breath that escapes a punctured throat, reasoning “if you look through a rat’s eyes… you will always be looking at shit. You are vermin.” Combined with the music’s sloth-like drag, the track brought to mind Flag’s flirtations with the mythos of Charles Manson, calling early tours ‘Creepy Crawls’ after the Family’s habit of sneaking into people’s houses and rearranging their furniture, to unsettle them. The menacing grind of Rat’s Eyes was similarly unsettling, and proof of Flag’s innate darkness.

BASTARD IN LOVE (Loose Nut, 1985)
But dark though they were, Flag also possessed a brilliant black humour, which flourished mostly in their earlier tracks with Keith Morris and still thrived in the era of Rollins, on evidence of the likes of TV Party and this gem from their fifth album, Loose Nut. Penned by Ginn, it’s Rollins’ performance that sells it, summoning the persona of a romancer (the titular Bastard) trying to convince his victim that (as the chorus repeats, over and over) his love is real, when the oily unctuousness with which he delivers the lines raises hackles of suspicion (Rollins would return to this ironic style on his own Rollins Band’s hit Liar). Bastard In Love is also something of a pop song, remarkable given that Black Flag’s final albums tended to hew closer to a jazzy metal hybrid than anything as punchy as this catchy stomper.

IN MY HEAD (In My Head, 1985)
Greg Ginn had originally planned the sixth Black Flag album as a solo turn, but reneged and recast it as what would be Black Flag’s final album (unless you count 2013’s atrocious What The…, which we can’t quite bring ourselves to do). And while relations within the group were reaching new depths, In My Head is one of the group’s finest albums, with this foreboding title track its most gloriously tortured moment. Ginn’s central riff is a thing of majesty, a writhing and crawling tangle of notes that feels like a poisonous spider tiptoeing up your spine; Rollins, meanwhile, is on top homicidal form, savouring every word of Ginn’s anti-social screed, and the line about to be “the bullet that goes ripping through your skull” in particular. Healthy people don’t make music like this, and indeed, soon after its release Black Flag were done. But they’d torched American music for eight long, furious years, and with Rollins at the lip of the stage, those flames raged their hardest.

Spray Paint The Walls: The Black Flag Story by Stevie Chick is available from Omnibus.