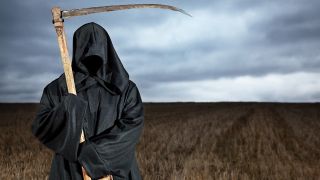 On Saturday night I witnessed a murder. Live onstage in London, two men, goaded by a crowd of onlookers, committed a savage act. They killed the concept of genres.

These two men were Scarlxrd and his DJ Jacky P, finishing their recent UK run of dates with a headline show at the Electric in Brixton. A large, darkened room with two balconies, boasting a heavy-duty soundsystem, and an open floor space tonight filled with 600 music fans. And they are music fans. Looking around you see bodies covered in Gojira, Parkway Drive and Architects merch, but also Kanye West and Public Enemy shirts – there’s even one guy in a stab vest, for reasons known only to himself. It’s a mix of people who spent this summer at Reading festival, dancing alongside those who wouldn’t be seen dead at Reading festival. It’s a vibrant, eclectic mix of people from varying walks of life, uniting under one roof to stick two fingers to convention. Not that they really know it.

Before Scarlxrd takes the stage, Jacky P is on warm-up duty, blasting out a bombastic mix of hip-hop, trap and R&B. And just like the famous scene in 24 Hour Party People where Tony Wilson realises the DJ is now the artist, the London crowd here are beholden to Jacky, bowing at his whim. And just when you think this is all just Post Malone worship, in drops Highway To Hell by AC/DC apropos of nothing, receiving just as raucous a reception. Arms are flung into the air, those previously swaying to cloud rap now air guitar, bathing in the pleasure of just enjoying music for music.

Music has been available for free (in one form or another) for almost two decades, and streaming has only simplified that process, removing the need to arduously search for dodgy torrents that will maim your hard drive. For years we’ve heard about listening habits changing and tastes broadening, as it’s just so easy to find music. Tonight is the physical embodiment of that shift. Nobody here ascribes to one scene or group, it’s all just music – and it’s all brilliant if you know where to look.

Besides, if almost every single piece of recorded music is just one click away, why would you limit yourself to just one genre? It’s an archaic way of thinking that if you like Watain you can only enjoy black metal, or if you like Little Mix you will only enjoy girlgroups. Technology has given us access to more music than we can ever possibly listen to, and while it’s fun to find the rarest of rare EPs from our favourite ‘80s band, there's so much more to explore, enjoy, and be inspired by.

Scarlxrd himself grew up listening to Slipknot and Eminem, for him boundaries of scenes didn’t exist, as long as it delivered a cathartic release. Listening to his trap/metal fusion now, it’s easy to see how his industrialised beats and piercing screams are the result of nu metal gone nasty. But that’s not where the comparison ends. Where before the crowd were dancing and swaying to Jacky P’s playlist, the previous buzz in the air has transformed into a full-blown explosion of adrenaline and raw energy.

Scar opens the pit up seemingly at the start of every song, wanting absolute destruction from all angles, like when Corey Taylor orders the maggots to unleash hell, but with more emphasis on having a good time. At one point, a girl falls to the floor and Scarlxrd stops the set to make sure she’s okay, ensuring she downs the bottle of water handed over by medics before continuing.

And the mosh continues. Song after song, the floor moving as one, bouncing in unison as Scar bludgeons eeardrums with Hell Is Xn Earth, Pieces Xf Shit and Heart Attack. He raises his horns to the sky, the crowd responds in kind. There’s a circle pit, they even do the whole ‘sit down jump up’ thing popularised by Slipknot and since used by Every Band Ever. It’s like turn of the millennium nu metal clubs at their most angsty, only with added Snapchat. It’s bridging a gap yet its own thing all at once.

As the night comes to its natural conclusion and senses are numbed for good, Jacky P drops Wonderwall. Yes, Wonderwall. The song that you love to hate and the soundtrack for every festival campfire isn’t met by derision, or even confusion, instead just deafening bellows of the opening verse as Jacky and Scar do (admittedly good) Liam Gallagher impersonations.

Where else will you find a night of music so indebted to aggressive metal and hip-hop, but unafraid to introduce AC/DC and Oasis into the mix? This is the future of music. Just music. Nobody cares about your arcane genre tags or inexplicably niche sub-genres that only two bands fit into, it’s all just sound, we’re in a genre fluid world and you should embrace it. Music is beautiful and narrow-mindedness is ugly.

Be part of something, be part of everything.