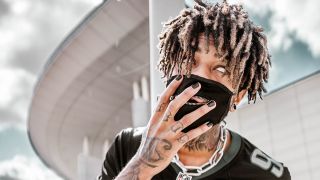 ‘Who is Scarlxrd?’ you’re probably asking yourself. And until a few weeks ago, we were asking ourselves the same thing. Seemingly from out of nowhere, this masked menace has erupted out of the underground and is playing sold-out shows across the UK and Europe, with festival slots booked in throughout the summer. Having built his fanbase online to the tune of 1m YouTube subscribers and 750,000 monthly Spotify listeners, we thought it was about time to talk to the man formerly known as super-smiley YouTuber Mazzi Maz.

“There were many artists on Soundcloud doing that ‘trap metal’ sound where you scream on the trap beat,” he tells us today, speaking over the phone while on tour. “But I felt like my music is no longer just two genres of trap and metal.”

So what is it? And who is Scarlxrd? And what happened to his former YouTube persona? We had to talk to the man himself to find out.

Hey Scarlxrd! You used to be in a nu-metal band called Myth City!

“I was listening to hella Linkin Park! I was listening to tons of Rage Against The Machine, some Incubus, Deftones, and then boom I said ‘Fuck it, let’s make a band,’ and Myth City was born. It was some rap-grind-metal fusion stuff, it was crazy. I wanted the band to be heavier than it was, I wanted to tune down the guitars and all sorts of shit, but they weren’t down for that so we stayed where we were at. It was a great time being in the band. I learnt so much, just live performance stuff. We were a live band, we made our entire EP live, and it was sick.”

Do you prefer it as a solo performer?

“Yeah, definitely. The creative process is so much easier. Being in a band, you all have to like each other’s parts before you can move forward, and that can take 10 minutes or 10 days, y’know what I mean? The process is a lot slower being in a band because if you do something that sucks, and not everyone likes it, then you have to rewrite your part. But on your own, if you don’t like it, you just change it on the spot and keep it moving. There’s more freedom for myself, and I’m pretty selfish to be honest.”

Where did your visual aesthetic come from?

“It evolved. I was heavily into anime and Tokyo Ghoul is where I got the zip mask from. And obviously, being inspired by Slipknot too, all these worlds collided for me into one big clusterfuck. All in all, the aesthetic developed naturally. Each piece that I wear and how I dress, it was all a step, it didn’t happen over night. Sometimes I wear the jeans with the belt on it and stuff, then the next day I wear the mask, the next day it’s all black and it develops slowly into what you see today.”

Do you take a lot of inspiration from Japanese culture?

“Aesthetically and visually, yeah. I’m a huge fan of what looks great and it just fits me; it’s a part of me whether I like it or not because I’m influenced by it. I love anime so much and I consume a lot of it, and it goes inside of my music, it goes inside of my visuals. It’s part of my day-to-day life.”

What do you say to people who saw you as your former self as a happy-go-lucky YouTuber and think Scarlxrd is all an act?

“That’s the beautiful thing about it, you pick what you decide to see. It’s all perception based. If you were to follow me from when I started YouTube to this moment now, and you saw every single day and every single thing I went through, then you’ll totally understand.

"The change isn’t as polar opposite as people think. What people do is they pick the happiest, smiliest thing from this side and the most dark and aggressive thing from the other side, and they totally skip the middle. That’s where they draw their comments from that it’s inauthentic and it’s not real. It’s all people’s perceptions and that’s the beauty of what I do. It’s all about the questions, it’s all about the art, it’s all about what is going on, and the more questions people ask the better.”

You said you hate people, is that something you stand by?

“There are a lot of people on this planet, and a lot of them are great, but I do not like people around me. I like to spend a lot of time alone, I don’t like to be around busy places, I need time to think. The way my mind works is that I cannot be distracted by bullshit and I feel like people bring a lot of bullshit. So all in all, I hate people.”

Is your music a reflection of this societal view that there are too many people?

"The studio I have set up in my spare room, so whenever I have something to say or feel like it’s time to say something, I can really do it. And the music is a reflection of what I’m trying to say. I find it hard at times to articulate myself on the spot, but on a song I’m able to do so pretty easily. I can say how I feel, say how I’m thinking. It’s so much easier on a song than to speak.”

It feels like you’re actually in quite a good place right now. You’ve got a strong following, a burgeoning career… but there are still aspects about life that are largely negative to you.

“I always count my blessings in life. I’m very grateful for the position I’m in and for the fans, but just because life is going extremely positively doesn’t mean I’m going to change. I don’t even think my music is negative, it’s all perspective-driven, it’s up to you, the listener, to pick what you hear, pick the message and pick how you feel.

"Everybody who comes to my shows has a smile on their face. Everyone that comes to a Scarlxrd show and speaks to me at the end says like ‘Yo, your music does real shit for me.’ And they’re positive. There is no real negativity surrounding my music, I speak the truth and I’m honest, and that pulls a positive perspective out of people. It doesn’t take a negative mindset to do it, it takes the mindset of having something to say, and this is how I communicate my ideas.”

What do you do outside of music?

“I like to sit and watch anime, I read a lot, I edit my videos, I edit my music, I meditate, I reflect on life. I keep my head together, I develop myself in my spare time, and you need to be alone for stuff like that. I do let loose and I do go out, I do have a good time in life, but self-development, keeping my brain in check and being the best I can be is at the forefront of my mind, so I spend a lot of time alone.”

What are your ambitions for Scarlxrd?