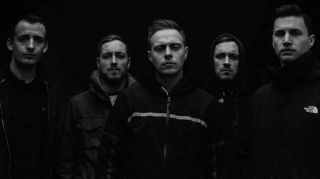 One listen to Nottingham metalcore mob Skies In Motion and it’s pretty clear that they’re big fans of Architects. And why wouldn’t you be? Architects are one of the best metal bands the UK has produced in over a decade, and one of the few bands who stand for something and are unafraid to scream it from the rafters. Throughout their kickass back catalogue they’ve got a ton of anthems, but the guys in Skies In Motion reckon they know which songs are the greatest. So here you go, the ten best Architects songs of all time!

Well, according to Skies In Motion anyway.

Sam Gaines (drums): “First things first, the riff at 1:20 is probably the greatest Architects riff of all time. It’s one of those riffs that you wish you wrote. The whole aesthetic of the song, as with many of Sam and Tom’s lyrics, touches on just how broken the human race is. We are all born into greed, and oil is pretty much at the centre of most modern wars. I love how this band are not afraid to speak out the truth in volume.”

Dave Stewart (guitar): “I fell in love with this song twice – the first was when the album came out. It just rises and falls so perfectly and brings a perfect close to the album, and showed me a side to Architects that I hadn’t heard before. The second was after my mum passed. We used to spend a lot of time by the sea, so the closing lyrics ‘As the sea breeze hits my lungs, it takes me back to where I belong’ really hit home.

Day In Day Out

Andy Shaw (guitar): “Day In Day Out is an Architects anthem from the get-go. There’s a heavy emphasis on the vocals in this one, with a massive singalong chorus, which put Architects on the map as a band that can write more ‘radio-friendly’ tracks. With a positive build ‘To all those not living in the here and now. To all those, (sing it loud)’ leading into a huge hands in the air-style middle-eight vocal, it’s a perfect uplifting live track.”

Andy Shaw: “Early Grave remains as one of Architects’ most popular early-career tracks, and still sounds as crushing today as it did on release. Pounding riffs and breakdowns throughout, with Sam Carter aggressively giving the middle finger to death. If there aren’t bodies flying about wherever this is being played, it’s being done wrong.”

A Match Made In Heaven

Dan Wheeler (bass): “Musically genius. The sheer scale of this track just does it for me. This song emulates a bitter anger at the murderers and liars who have caused so much bloodshed, describing the bloody aftermath that tyrants – such as Bush and Blair – have caused to feed their own greed. We feel that Architects have addressed this with clever lyrics and an elegant barrage of riffs to create a truly enormous anthem.”

Adam Connor (vocals): “This song will always remind me of my love and passion for seeing Architects live; my friends and I singing along to it at shows was the best feeling ever. I’ve seen them a lot of times but this song mainly reminds me of seeing them at Rock City and Rescue Rooms in Nottingham. It’s an absolute masterpiece, I will never get tired of this song.”

Dave Stewart: “I saw an interview Tom and Sam did about this song in particular, and everything they spoke about is pretty much exactly how I view religion. It really spoke to me. Plus I think the breakdown is possibly the best Architects breakdown they have ever written, changing and evolving after every single phrase. It’s impossible to listen to and not bang your head.”

Sam Gaines: “The whole intro, from Dan’s build-up into the drop with ‘This is the reason we are bitter and then some’ is simply one of the most impactful parts in modern metal. The reason this song speaks to me is because of the messages in certain lyrics like ‘We’ve given the vampires the keys to the blood bank’ which reference things like current world trauma, and alludes to certain underlying/hidden aspects that play on my mind like The Rothschilds and true rulers of the world.”

Dan Wheeler: “There is a minority of individuals who decide everything for us, they are the few that dictate our fate. The super-rich, the governments of the world, and the rest. These Colours… shows the absolute disgust at the greed of The Few that steal from The Many. Architects have described their anger for this perfectly and I feel that there are a lot of people who can relate to this anthem. Not just the lyrics, but musically this song expresses the frustration of our money-made society.”

Gone With The Wind

Adam Connor: “This song hit me as soon as I heard All Our Gods Have Abandoned Us; the lyrics just spoke to me and felt relatable. Even though the lyrics probably had a different meaning to what I felt. After learning about Tom’s death, the heavy meaning and reality behind the song became clear, which made the song all that more meaningful. It had changed from a song to a story, a story that I’ll always keep close to my heart. Rest in peace, Tom.”

Skies In Motion’s debut album Life Lessons is out September 1 and is available to pre-order now. Check out their latest video for Cascades below.