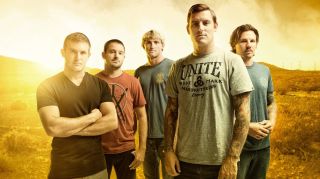 For almost 15 years, Australia’s Parkway Drive have been reinventing the metalcore template. From savage beatdowns to ripping solos, they are heavyweights of the genre, commanding huge crowds across the globe with their sensational live production and unstoppable energy. It’s no wonder then that they have influenced a whole generation of metal bands – including Brighton’s Fathoms.

On the cusp of releasing their new album Counter Culture, we caught up with the guys in Fathoms to talk about one of their favourite bands of all time. Have released five albums so far, with each different to the last, picking the best Parkway Drive songs isn’t easy, but superfans Fathoms relished the challenge. Here’s what they had to say…

“This song got us – and I’m sure so many others – into the heavy music scene. Before we heard this song, a lot of us had little interest in metal. The personal lyrics and the heavy breakdowns really make this song a classic. And let’s not forget the drop line: ‘So cry me a fucking river, bitch!” To this day it still resonates at every metal club night and in every touring band’s van on a long drive.”

“So god-damn heavy. We will always remember how scared to death we were running into the pit when they played this live at Brixton with Bring Me The Horizon, Architects and The Devil Wears Prada. This will always be one of our favourite Parkway tracks.”

“One of the all-time classics. Every real Parkway Drive fan knows every lyric to this song. We learnt the whole of this song as a band when we first started – that’s how obsessed we were about it. The vibe this track gives off to a live crowd is unforgettable. The live performances are insane as everyone knows every single word!”

“This song never gets old. It’s another typical Parkway Drive tune where you either headbang til your neck falls off, sing the riffs out of key, or air guitar the solos. When they start playing this song live, the whole crowd sings along to the guitars. It’s a truly epic song live!”

“Although it’s not one of the classics, this song just goes to show how consistently strong and talented Parkway are. The track is opened by a ridiculously cool drum fill and it definitely gets an award for one of sickest music videos of all time.”

“This was one of the first songs we heard by Parkway Drive. It was the first time some of us listened to a heavy band that don’t play your standard metalcore. You would be waiting for a chorus with clean singing but soon realise that you are getting a heavy-ass breakdown or riff instead. This changed a lot of our writing styles completely.”

Smoke Em If You Got Em

“This track brings back so many memories; it was actually the first ever track that Max, James and Lui played together as musicians. I can remember learning all the words and screaming along – it was sick. This reminds me of being a teenager and really getting into the metal scene. A top track.”

“This classic parkway song gets you banging your head whether you’re walking to work or having tea at your grandma’s house. Who could forget the intro to this one? Chug your titties off to the best heavy live song by Parkway! The vibe this track gives off to a live crowd is unforgettable. The audience always know every single word, which makes for an amazing live experience. Kill someone!”

“Another amazing live song. From the bouncy start to the amazing melodic middle section, no Parkway show would be the same unless they played this song. I remember Winston throwing a football into the middle of the pit just before the song dropped and who ever came out with it got £40 of free Parkway merchandise. Amazing!”

“This song proves that Parkway Drive are going to be around for a very long time. The way they have integrated their new sound with the old is amazing. The samples they use in this song give it an amazing feel and vibe. We are massive fans of this song and the video is just off the god damn chain!”

Fathoms’ new album Counter Culture is released December 1, and available to pre-order now. You can watch their new video for B.E.L.I.E.V.E. below.

Parkway Drive's Winston McCall: the 10 albums that changed my life