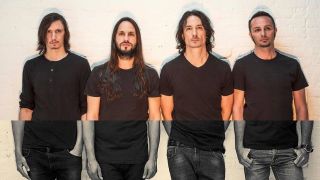 Long Island experimentalists Car Bomb are no strangers to the power of Gojira, frontman Joe Duplantier actually produced Car Bomb’s latest album Meta. How’s that for some metal cred? In fact, it was something of a dream come true for Car Bomb guitarist Greg Kubacki who is a massive fan of the French prog-metallers, so we thought we’d ask him to pick his ultimate top 10 songs by Gojira. It’s not an easy task, but it’s hard to argue with the songs listed below. Magma really is a masterpiece, isn’t it?

“When we first started touring with Gojira back in 2009, I had never really heard their music before or seen them live, but at the first show they played this song and my jaw immediately dropped to the floor. Mario was playing steady-as-fuck double bass for what seemed like forever, and was weaving in and out of different time signatures at the same time. Then to top it off they built up to an emotionally-charged anthem of a guitar riff at the end. I was like ‘Wait…what the fuck just happened?’ I’ve been hooked ever since.”

“The first time I heard that verse drumbeat – where it alternates between a choked crash and an open crash – I thought that was just the coolest fucking thing ever. It’s so basic but so original, and a perfect example of how Gojira use these unique elements to make their songs hooky and heavy.”

“Gojira are huge Morbid Angel fans and it’s really apparent on this track. It’s got tons of riffs with super-fast picking that sound like something off of Covenant or Domination. To spice things up they throw in these huge stops with floor tom hits that somehow make all of that fast picking groove like crazy.”

“This song starts off with all these little choppy noises on the guitar, which reminds me of Coalesce in a way. Then all of that focuses into a groove somehow and then it breaks down even further into this waltz of a guitar riff that’s really catchy. Super tasteful and original.”

“I always think of this song when I go too far down the rabbit hole with a complicated riff I’m writing. Sometimes it’s best to keep things simple: palm-mute the low string at a comfortable pace, after a while smack the top three open strings as hard as you can, then slide down the bottom string. Boom, you’re done – best riff ever.”

“Joe always writes these creative two-handed tapping riffs, but this one is my favourite solely for the fact he’s doing it with a cleaner tone. Rather than being flashy, he paints a really subtle and moody atmosphere with the tapping. They’re also doing some weird stuff with the number of meters they hold each chord for, which adds an element of surprise without disrupting the ethereal flow of the song.”

“I was lucky enough to hear this song as it was being recorded while working on Meta at Silver Cord Studios. I heard those big open chords in the beginning of the song and smacked myself in the head for not thinking of that riff first. Sometimes they make it look so goddamn easy. Fuckers!”

“My face hits a brick wall every time that syncopated 3⁄4 riff at the beginning gets bitch-slapped by those three low bended guitar notes. It sounds like a huge chainsaw cutting through a flying Apache helicopter. And then of course kicks in a quick chorus you can sing along to. It’s such a simple ABCABCA arrangement, but it works.”

“This is another song that I got to hear in the studio before it was finished. I remember seeing the Pro Tools session file and being surprised that it had almost 100 tracks it it – weird detuned guitar hits, distant chants, auxiliary percussion, and a bunch of other shit I thought was a little over the top at first, but when you hear the song as a whole all these subtle tracks in the background add up and provide extra depth and mood. This was definitely a huge ‘Aha!’ moment as a songwriter/producer.”

The Heaviest Matter Of The Universe (From Mars To Sirius, 2005)

“This has always been, and probably will always be, my favourite track of theirs. It’s constantly shifting gears but never goes off the rails. Of course when it kicks into that pick scrape Morbid Angel riff in the middle is when I lose my shit.”