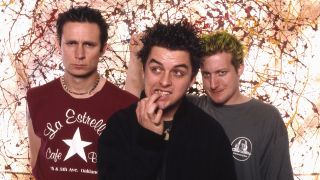 Before the release of Dookie put him on the rock star treadmill of tour bus bunks and five-star hotels, Billie Joe Armstrong lived in the basement of a dilapidated student house in the Californian college town of Berkeley. The basement wasn’t just where Armstrong ate, slept and smoked – although the bongs, empty pizza boxes and sagging couch bore witness to the fact that it was used for all three. Rather, this was the Green Day headquarters; the base from which the band fielded calls from record labels, and where they rehearsed their set and recovered from their touring schedule. It was also where Armstrong wrote Basket Case on his blue Fernandes Stratocaster. He was 22 years old.

Like the other tracks on 1994’s Dookie, Basket Case was recorded in Fantasy Studios in Berkeley (which had previously played host to Aerosmith and Creedence Clearwater Revival), with Rob Cavallo on production and the whiff of narcotics hanging in the air. There’s little to suggest that Green Day considered the song to be any stronger than the other potential hits on Dookie, and no evidence that they knew just what a phenomenon it would become. If they had, one suspects they might never had recorded it.

Basket Case was not an overnight success. It didn’t – as media sensationalists would have you believe – pogo its way into the punk history books without breaking sweat. Upon its original 1994 release, the single stalled at number 55 in the UK chart, before nosediving into oblivion, while its parent album Dookie initially limped to number 141 in the US Billboard charts. Inevitably, it was the asylum-themed video’s heavy rotation on MTV and Green Day’s anarchic performance at Woodstock in 1994 that finally saw Basket Case reach its slacker demographic. With momentum gathering, the band reissued the single in the UK (where it hit number 13 in February 1995) and planted a firm foothold with an incendiary set at that summer’s Reading Festival. Both sides of the Atlantic were now dancing to Green Day’s tune.

But to dismiss the impact of Basket Case as the result of a marketing campaign is to miss the point entirely. It was the perfect pop punk anthem; a three-chord thrash that could be approximated by any covers band, and burnt out as fast as it had reared up (it lasts exactly three minutes). “It got to the point where I wasn’t even singing the lyrics any more,” Armstrong told VH1 of audiences’ reaction to the song. “People were just doing it on their own.” This sense of egalitarianism – the fact that it didn’t challenge, patronise or exclude – meant Basket Case could be enjoyed by anyone. Ironically, this would soon prove to be its undoing.

The song also saw a greater complexity creeping into Armstrong’s lyrics. “Sometimes I give myself the creeps, sometimes my mind plays tricks on me,” he yelps in the chorus. “It all keeps adding up, I think I’m cracking up…” The concept of alienation from the world was a staple theme in punk, but unlike, say, Good Charlotte’s Madden brothers, Armstrong actually meant it. Like bassist Mike Dirnt, the singer was prone to panic attacks and anxiety, the symptoms of which were often so extreme that he feared he was losing the plot. “Basket Case is about anxiety attacks and feeling like you’re about to go crazy,” he later explained. “ At times, I probably was. I’ve suffered from panic disorders my entire life. I thought I was just losing my mind. The only way I could know what the hell was going on was to write a song about it. It was only years later that I figured out I had a panic disorder.”

Things got even more tangled in the second verse, with Armstrong’s inversion of genders leading to chatroom speculation that this was a confession of his bisexuality. “I went to a shrink to analyse my dreams, she says it’s lack of sex that’s bringing me down,” he begins, before prompting countless scratched heads in the pit with the next line: “I went to a whore, he said my life’s a bore, and I quit my whining cause it’s bringing her down.” The singer would later brush over the line, claiming that “I write a lot of my lyrics in the first-person perspective, even if they aren’t about me. I’d rather write shit about myself than write shit about someone else.”

Even though the haze of platinum sales and record label backslaps, Armstrong must have seen the backlash coming. Until Basket Case, Green Day were a modestly successful band, who followed punk’s dogma to the letter and still played the venue where they’d cut their teeth as teenagers (the Gilman Street Project in Berkeley). Now they were playing arena tours to punters who drank, fought, and left after Basket Case. “When it came out, we had no control over who liked it,” recalls drummer Tré Cool. “We had a bunch of super-fivin’ marines going, ‘Yeah, cool, you’re my favourite fuckin’ band, bro!’ You have no control, so you just go, ‘Oh, great, whatever’. We were playing too many Coliseum-style shows. All these ice rinks around Europe, the US and Canada – it gets really impersonal after a while. It became like, ‘OK, let’s play Basket Case again’.

If the song was endearing Green Day to a wider audience, it was doing little to cement their punk fan base. Many of the band’s core following had voiced concerns when they left Lookout! Records in 1993 to sign for Reprise, and by forcing punk overground with an insanely catchy single, Armstrong had pushed many of his subjects too far. The fanzines sneered. The interviewers raised the question of selling out. Even Gilman Street turned its back on its prodigal son, via an anonymous message carved into the bathroom wall that simply read ‘Billie Joe Must Die’.

Set against this yin/yang of mainstream hysteria and underground contempt, it’s no wonder that Green Day reacted violently against the legacy of Dookie. “We’re not going to try and write Basket Case 12 times in a row for one record,” instead the frontman, and he wasn’t kidding. Released the following year in 1995, Insomniac proved to be a darker and less accessible offering, written on cheap speed and shot through with the message that the party was over. It was the start of a (relative) career lull that ended with the release of American Idiot, and it’s hard to shake the feeling that this was Armstrong’s attempt to compensate.

These days, the band claim they enjoy playing Basket Case again. Perhaps this is because their string of singles following the release of American Idiot have taken the pressure off in the singalong stakes. Maybe they’re getting too old to cling to the principles they held as teenagers (although it’s surely no coincidence that they often played Basket Case directly after a cover of Operation Ivy’s Knowledge – undoubtedly the most ‘punk’ moment of their set, not least because it sees fans invited onstage to play the instruments). Or maybe Billie Joe Armstrong has finally accepted that it’s an amazing song that makes crowds go apeshit. Hindsight, as they say, is always 20⁄20.