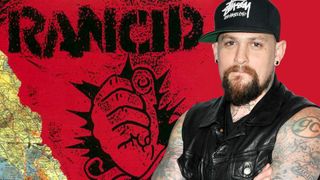 The band that changed my life is Rancid. When we were kids, we weren’t really allowed to listen to anything other than golden oldies. Our parents were afraid that we would become devil worshippers or something. But when Let’s Go came out, my older brother [Josh] bought the album on cassette. I must’ve been around 14 at the time and I’d never heard anything like it before.

I remember him telling me, “They’re from the East Bay and their singer is called Lint – he used to be Operation Ivy and they were legendary. Then they started this band.” He was that older brother – a music historian!

There was no internet back then and we lived in a really small country town, so if we ever got hold of a Rolling Stone magazine or anything like that, then we read it until it was wrinkled. We’d fight over it and rip out the pictures to keep. After I saw Tim [Armstrong] for the first time, I started putting pins in the sides of my pants and using dental floss to sew patches onto my jacket. Rancid showed me that you didn’t need money to look cool.

After that, I started going to shows. The punk shows were always where we had the most fun. That was when we first met Rancid. We were kids. We met Tim and Lars [Frederiksen] and gave them our tape. Tim actually called me the next day and told me that he liked it. Later, when we got signed, we saw them in Boston when we were on our very first tour for the first Good Charlotte record. They remembered meeting us and they invited us to come and watch them play the venue next door. They even gave us a shout out on stage. They said, “This is for our boys Good Charlotte who just played next door!”

Now, I remember being a part of Rancid’s fan base before our band got signed; they were very passionate and they all stuck together. So when you got the nod from the guys in Rancid – particularly at that time back in the late ‘90s – it was a big deal. They were the guys that stood next to us in the early 2000s when we started getting a lot of shit from punk bands. They put their arms around us the whole time.

The summer after our first record Good Charlotte came out in 2000, we went out on Warped Tour. Rancid invited me to come on stage with them and play Olympia, WA. I didn’t want to because I was afraid or whatever, but Tim and Lars said, “You need to be on stage with us.” So I got up and played with them every day and Lars tattooed me as well! They really were like big brothers to us. We have a lot of good memories from that time and we’re still close friends to this day.

I actually had coffee with Tim not too long ago when we were both back in LA; we talked about those times and how long we’ve known each other. It’s been 20 years since I met them as a fan until now. Those guys have played such an important role in the music I love and how I dress. And the one thing that I think Rancid do so well is their classic approach to songwriting; they write great songs with great melodies and Tim’s delivery is one-of-a-kind. That’s something that we learned from them.

Their lyrics deal with poverty a lot. That really spoke to us as kids because that was a big part of our lives growing up. They made us feel like we weren’t alone. So we wanted to talk about hard times and coming from nothing because we felt it might help a handful of kids get through the day. Tim was always told stories in a very real way and that was a huge influence on us as well.

If I had to choose a band that’s influenced our aesthetic, our work ethic and the way we learned about the world, then it would definitely be Rancid. They’re the band that we look up to the most.

Benji was speaking to Matt Stocks.