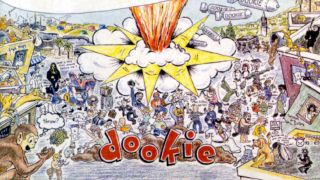 With the eloquent, Bush-baiting concept album American Idiot still a dot on the horizon, Green Day had a reasonable claim to be America’s dumbest pop-punk band in 1994. Not entirely surprising then, that when it came to the business of naming their make-or-break third album, they settled on the US slang for baby shit.

“If you can say the word ‘dookie’, you can keep in touch with the child within,” said bassist Mike Dirnt. “I’ve always thought that’s part of our success – we’re immature.”

The philosophy extended to the sleeve art for Dookie, which, in contrast to the moody monochrome cover of 2000’s Warning, depicted a comic-style scene of anarchy in an unspecified US town, with a carnival of freaks, Elvis impersonators and robots throwing the excrement that has just been dropped by a fleet of dog-piloted planes. While at first glance the cartoon might seem amusing but meaningless, it’s really a treasure trove of in-jokes and rock reference points: like the ominous figure quoting the title track of 1970’s Black Sabbath (“What is this that stands before me?”), the ‘Eat at Chef Wong’s’ streamer on the back of the Bad Year blimp (it refers to an illustration on the Ramones’ 1977 album Rocket To Russia). Even the artist chosen for the job was relevant: Richie Bucher was a well-known face on the East Bay punk rock scene.

“I wanted the Dookie artwork to look really different,” Billie Joe Armstrong remembers. “I wanted it to represent the East Bay and where we come from, because there’s a lot of artists in the East Bay scene that are just as important as the music. So we talked to Richie Bucher. He did a seven-inch cover for this band called Raooul that I really liked. He’s also been playing in bands in the East Bay for years.”

“There are pieces of us buried on the album cover,” the frontman adds. “There’s one guy with a beard with his camera up in the air taking a picture. He’s this guy Murray that’s been around the scene for a long time; he took pictures of bands every weekend at [Green Day’s local venue, and punk rock institution] Gilman’s. The robed character that looks like Ozzy Osbourne is the woman on the cover of the first Sabbath album. Angus Young is in there somewhere too. The graffiti ‘Twisted Dog Sisters’ refers to two girls from Berkeley. I think the guy saying ‘the fritter, fat boy’ was a reference to a local cop. There’s a ton of weird references all over that sleeve.”

The A-Z of Green Day