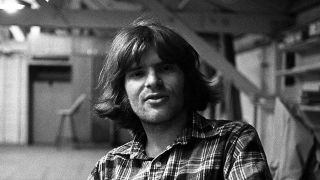 John Fogerty is a true American icon. As leader of Creedence Clearwater Revival in the late 60s and early 70s, he wrote and sang some of the all-time classic rock‘n’roll songs: Proud Mary, Bad Moon Rising, Travelin’ Band and Have You Ever Seen The Rain to name but a few, songs that Kurt Cobain and Krist Novoselic played in a Creedence covers band before they formed Nirvana.

But if there was one moment in time when the power of Fogerty’s songwriting was felt all around the world, it was on July 13, 1985, at precisely 12.02pm, when the mighty Status Quo kicked off Live Aid with a song Fogerty had written ten years earlier, one perfectly suited to this global music event: Rockin’ All Over The World.

In truth, Fogerty’s career didn’t get off to the best of starts. In the mid 60s, the band he’d formed with elder brother Tom in El Cerrito, California was working under a name that today beggars belief: The Golliwogs. At a time when new social values were emerging, not least the civil rights movement, The Golliwogs were doomed to failure. But when, in 1967, the band was renamed Creedence Clearwater Revival, everything changed.

As important as the new name was a shift in the group’s hierarchy that saw original frontman Tom cede power to John.

“I could sing,” Tom would later state,“but John had a sound.”

That sound would become one of the most powerful in American music. Backed by Tom on rhythm guitar, bassist Stu Cook and drummer Doug Clifford, John Fogerty blossomed as a singer, guitarist and songwriter of rare distinction. His sound was timeless, relevant to the new rock audience yet steeped in age-old Americana. Blending blues, folk, soul, country, rock ‘n’ roll and psychedelia, the music had a rootsy, backwoods aura that led rock critics of the day to brand it ‘swamp rock’.

In stark contrast to CCR’s prolific output, John Fogerty has released just nine solo albums in nearly 40 years. But with 2009’s The Blue Ridge Rangers Rides Again coming just two years after its predecessor Revival – and followed in 2013 by Wrote a Song for Everyone – it seems that Fogerty is making up for lost time.

But it’s the darker stuff that gives the album its real weight: the eerie Run Through The Jungle, the melancholy Who’ll Stop The Rain, and an 11-minute stoner-jam version of Motown favourite I Heard It Through The Grapevine.View Deal

On Creedence’s first US Number One album, John Fogerty truly came of age. Green River was tighter and punchier than their first two LPs, playing Fogerty’s sinister edge to the fore on the album’s biggest hit: Bad Moon Rising might’ve been a jaunty rock‘n’roll tune, but with its terrifying visions of impending apocalypse, it’s pretty spooky for a UK chart-topper.

Fogerty got heavy on Green River, from the urban paranoia of Commotion to the cursed blues of Tombstone Shadow. And on Wrote A Song For Everyone, he emerged as a powerful social commentator.View Deal

The second Creedence album was their breakthrough, reaching Number Seven in the US charts. It was on Bayou Country that the Creedence sound took shape; Fogerty was Californian by birth, but as this album’s title implied, his sound and imagery drew heavily upon the South.

Proud Mary, a transatlantic Top Ten hit, was an elegy for the Old South and its mighty riverboats, while the dark swamp-rock of Born On The Bayou evoked ancient Southern mystique. As southern gent Nathan Followill [Kings Of Leon] says, “Creedence made the South cool.”View Deal

The last of the band’s three great albums of ’69 arrived just three months after Green River, boasting a looser, more upbeat vibe. Fogerty still had axes to grind, warning of social unrest on Effigy, and delivering one of the great protest songs with the searing Fortunate Son.

But overall, he applied a lighter touch on Willy And The Poor Boys, evident in the busker shuffle of Down On The Corner, a country version of blues legend Leadbelly’s Cotton Fields, and traditional jailbird ballad The Midnight Special, sung gospel-style.View Deal

The sixth Creedence album was their last with Tom Fogerty, and the last great work of the band’s all too brief career. Pendulum features two of John Fogerty’s best-loved songs, the rattling Hey Tonight and the beautiful Have You Ever Seen The Rain?, alongside uniformly fine songs from raging opener Pagan Baby and Stax homage Chameleon, to the more reflective Sailor’s Lament and It’s Just A Thought.

But the band would never be this good again. And for John Fogerty, it would be all of 13 years before he made another record worthy of his name.View Deal

Fogerty didn’t have a hit with his most famous solo song: it was Status Quo who transformed Rockin’ All Over The World into a rock anthem, while Fogerty’s version debuted on his 1975 self-titled album. His biggest solo success came with Centerfield, topping the US chart, and featuring two acidic songs, Mr. Greed and Zanz Kant Danz, aimed at Fogerty’s nemesis, Fantasy Records boss Saul Zaentz.

Zaentz later took Fogerty to court over the album. accusing Fogerty of plagiarising his own CCR material (which Zaentz then owned) but the Supreme Court found in the songwriter’s favour.View Deal

On the group’s debut album, John Fogerty was still learning his craft. Tellingly, the two songs that made the greatest impact were covers, Fogerty playing the bogeyman on Screamin’ Jay Hawkins’ voodoo blues I Put A Spell On You, and turning Susie Q – a rockabilly hit by Louisiana guitarist Dale Hawkins – into a moody, eight-minute slowburner, later edited to reach Number 11 in the US singles chart.

By contrast, Fogerty’s own songs were a little prosaic, aside from the gritty Porterville. But in the following year, with the band’s second album Bayou Country, he truly found his voiceView Deal

After Creedence’s messy demise, Fogerty made a clean break from his past with a solo debut that defied all logic. Not only was The Blue Ridge Rangers a country album – a bold move in an era when country music was widely considered passé – it was comprised solely of old standards, one of the foremost songwriters of his generation relaunching his career with an album on which he hadn’t written a note.

His feel for country music shone through, however, especially on the tearjerker She Thinks I Still Care. Twenty-six years later, Fogerty recorded a follow-up The Blue Ridge Rangers Rides Again.View Deal

Fogerty’s best album in recent years was a throwback to his glory days. His first original work since returning to Creedence’s former label Fantasy, Revival had a title and a sound loaded with nostalgia. It even had a twanging boogie tune named Creedence Song. Fogerty played it safe on Revival, although there were a couple of surprises.

Longshot rocked like AC/DC, and I Can’t Take It No More was, of all things, a punk rock rant: proof that the old rocker still had fire in his belly. But more importantly, Revival proved Fogerty was still a great songwriter. And it was on the mellow songs, Gunslinger and Broken Down Cowboy, that he really nailed it.View Deal