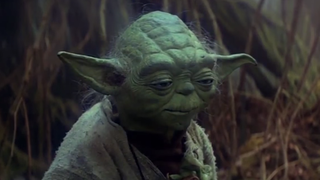 Every day is a Green Day for Yoda

Before Green Day entered the studio to record their major label debut Dookie, frontman Billie Joe Armstrong sat down and scribbled lyrics about his struggles with anxiety.

“The only way I could know what the hell was going on was to write a song about it,” he explained on VH1’s Ultimate Albums series, about the origins of Basket Case.

So, while he was spilling his guts on the 1994 single, it’s highly unlikely that he envisioned the story of his panic disorder being repeated by a laundry list of Hollywood stars on the internet. Besides, the web was in its infancy then and it’d take ages for a picture to download using a dial-up connection. We’re talking pictures of cars, interior design ideas or ASCII versions of famous logos. Nothing more than that, OK?

But, some 22 years after the album and single’s release, YouTube clip surgeon Unusual Suspect has seemingly trawled through every film ever made (all 109 of them) to create this weird, yet oddly compelling take on a modern punk classic.

Which song should Unusual Suspect tackle next? Suggestions for Napalm Death’s You Suffer will be dismissed as lazy.

Green Day’s new album Revolution Radio will be released on October 7. You can hear the single Bang Bang now.