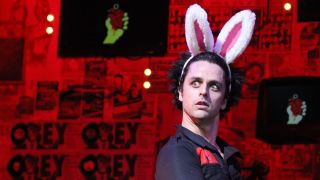 It became totemic in the ‘90s, launching an explosion of pop-punk in the US and UK. 1997’s Nimrod marked a change into more serious directions before 2000’s Warning ventured further into more mature territory, angering some fans. 2004’s smash hit American Idiot relaunched the band as a more political force, and it earned multiple Platinum status around the world as listeners bought into its anti-George W Bush rhetoric.

Thirty years after forming, the band are now rock royalty, and last year were inducted into the Rock ‘n’ Roll Hall of Fame.

“In the ‘80s it was a pretty established fact that punk would get you nowhere. The biggest punk bands at the time were Fugazi and Bad Religion so, back then, no way did I think playing punk rock would take us to any level at all. After ’94 it’s become ridiculous and there seem to be no limits.”

“I don’t think I’d perform naked onstage again. Once some of your fans are younger than the age of the band, then you can’t get naked.”

“Sometimes I don’t know what I’m writing about. I stopped once and asked myself, ‘What are you writing here?’ I didn’t know what the fuck I was talking about. All I was doing was writing shit down. It takes time for me to step back and go, ‘Oh – that’s what’s going on’.”

“If I had to get rid of one record from out back catalogue, I’d go with the 1,000 Hours EP. It’s the first one, it was short and it contains the mushiest lyrics I ever wrote – even though it got the ball rolling for us. Which one do I think people outside the band would choose? Probably Warning.”

“If I wasn’t a musician, I’d probably be selling drugs. That or working in construction or in a café. I’d always be doing odd jobs. I can’t really see that I’d have a career in international finance or anything like that.”

“After Nimrod, even though it was the height of pop punk, we got into things that were a bit more rootsy and stuff that was more political or topical. With age, we started absorbing more information and becoming bolder as songwriters. Every record has been a step forward, a step deeper into political areas and into having records with themes and stories.”

**“I was a little surprised when we wrote American Idiot that other people weren’t saying more. **The thing about it was that it seemed like the government were fulfilling the prophecy [we had written on the record]. Things got lamer and lamer to the point where it seemed the record was making more and more sense every day.”

“As American Idiot got more and more successful, the pressure of following it was always lurking in the back of my mind. To be perfectly honest: there was a lot of pressure. But if there’s a challenge, I’m like a mosquito going towards the light – I have to grab onto it. That’s the way I’m made. You have to hit it head on and have balls. But that takes patience. You have to drive yourself a bit crazy.”

“After the American Idiot tour, it was nice to get back home and get into some different stuff. I was riding a motorcycle around, going surfing and watching my kids go through puberty. Turns out I can grow one hell of a beard. I become Weird Beard and would run down the beach and have people throw change at me. There are good sides of being normal and stepping away from Green Day and other times where you want to run back to it as fast as is humanly possible.”

“I took the family to New Orleans to help build houses after Hurricane Katrina. I was hanging soffits and building roofs. I got fulfilment from doing that as an example for my kids. It was mostly about ingraining something in them that they need to be conscious of things like that.”

“How do I deal with pressure? Well, I don’t go strait-jacket, lock me up in a rubber room crazy. It is close, though. I think if you’re going a bit mad, then you’re onto something. You’re dealing with dark places when you write. Songs are a reflection of what lies beneath the surface. You might not always like what you see when you go there.”

“I fear too much isolation. I have to feel I’m connecting. You have to be a member of society to be able to comment on society. You can’t just disconnect. With Green Day, we always have to have those moments where we’re diving straight in and bringing it as hard as you can to people.”

Green Day: Finally, a rock doc with a happy ending