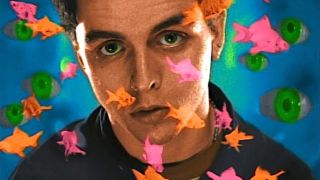 A still from the Basket Case video

Green Day were propelled into prominence during the golden age of music videos. A time when record labels and bands would spend hundreds of thousands of dollars on a four-minute clip, this Oakland trio were not shy of presenting themselves in both visual as well as a musical form. Natural performers to a man, the group have managed to translate themselves onto the small screen with such aplomb that over the course of more two decades they have amassed as fine a body of televisual work as any act you might care to name.

Quite why 2009’s 21st Century Breakdown album received only a fraction of the acclaim (or sales) of American Idiot is a subject worthy of academic debate. But the clip for leadoff single Know Your Enemy is a doozy, if for no other reasons that it features a lot of fire. An overlooked classic.

If you require evidence that Green Day weren’t entirely enamoured of the avalanche of success that fell upon them with Dookie, then look no further than Geek Stink Breath. The lead-off single from 1995’s coiled and troubled Insomniac album, this two minute 15 second slab of anxiety featured in its gritty video real-life footage of one of the band’s friends having his teeth removed. Open wide and say…. Ewww.

The sense of trouble continues on Brain Stew, a song about Billie Joe being “fucked up and spun out in [his] room.” The beautifully shot video features the band on a knackered settee being dragged over a tip – literally, a tip. Look out for the beautiful touch of Billie Joe idly picking up a newspaper that is regarded briefly before being tossed back atop so much other rubbish.

Filmed in downtown San Diego, the video for the joyous anti-anthem Minority is a bonanza. Watch as the band perform on a 4th of July style parade float, and don’t watch as Billie Joe says “fuck ‘em all” and flips the bird to the buildings around him (cos that bit was edited out of the TV versions of the clip). The song remains a live favourite to this day.

Upon its release in 2004, Boulevard Of Broken Dreams proved such a smash that for three months it remained resident in the UK top 40 singles chart. A moody yet melodious monster ballad, the accompanying video is similarly windswept and interesting. Director Sam Bauer having scratched the film with razor blades and cigarette butts enhances the grittiness of a clip that sees Green Day strolling nonchalantly over a faux desert wasteland.

When Dookie, Green Day’s major label debut, limped onto the US album chart at number 141 in February 1994 it looked like this effervescent trio from northern California might become just another footnote in the post-Nirvana gold-rush. But MTV’s soon-to-be constant airing of a video for Longview that was shot for peanuts in the band’s shared Berkeley home proved to be their ticket to the Big Time.

Starring Evan Rachel Wood and Jamie Bell, the video for Wake Me Up When September Ends provides a master class in combining the personal with the political. The story of one young man leaving his love behind to fight in Iraq, a decision that costs him his life, the video is a perfectly judged in its examination of nobility and grief. This is rendered yet more impressive when one considers that the parent song is in fact about the death of Billie Joe Armstrong’s father, and not about war at all.

The final clip from the blockbusting American Idiot set, the long-version of the already long Jesus Of Suburbia is the sight of Green Day and director Sam Bauer truly letting themselves go. Foul-mouthed and expansive, the piece is by turns a dark fairy-tale as well as a very bad acid trip. Unsurprisingly, this video didn’t receive a great deal of TV airtime.

The first video in which Green Day looked like the superstars they were fast becoming, the decision to locate the dumb-but-never-stupid Basket Case in an insane asylum was a touch of directorial genius. A song of such pivotal brilliance, 22 years on the band would be lynched if they omitted it from their live set.

It seems incredible to remember, but when in 2004 Green Day unleashed the title track of their then forthcoming album, American Idiot, their stock was not trading high. In one fell-swoop the Sam Bayer directed performance-video clip changed all that. Playing in front of a corrupted US flag that bleeds green all over the group themselves, this was the sight of rock stars fit for the 21st Century.

Want even more Green Day? Check out these stories below!

Watch this band blaze through Green Day's discography in 10 minutes